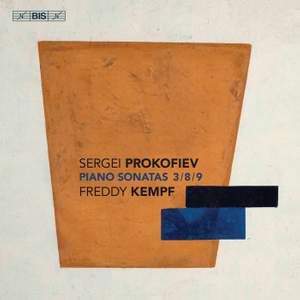 It seems that the enfant terrible Prokofiev, and his ‘Toccata-ness’ (as Russians like to put it) in particular, are still a great fit for
Kempf’s temperament, because he relishes the exuberance... — Gramophone Magazine, January 2020 More…

Sergei Prokofiev virtually grew up at the keyboard –he composed for the piano from early childhood, and the instrument was his workshop and laboratory. Well before the end of his student days he had absorbed the virtuoso techniques of Rachmaninov and Scriabin, and to these he added his own brilliant, sharp-edged virtuosity, marked by a keen contrast between dramatic, hard-driven passages and more intimate and gentle lyrical moments. His nine sonatas therefore hold a very special place in his output and represent his language at its most personal, free of any external dramatic, verbal or visual associations: they contain the essential Prokofiev.

Freddy Kempf has previously recorded four of the sonatas, released on BIS-1260 and -1820 to critical acclaim: ‘Kempf is joyfully exuberant, flashing through every savage challenge with the assurance and instinct of a born virtuoso’ (Gramophone). With this release, he adds another three sonatas to his discography, starting with Sonata No. 3 in A minor which Prokofiev premièred in Petrograd in April 1918. Three weeks later he left Russia and only returned in 1936, after seventeen years spent in the USA, Germany and France. Premièred in 1944, Sonata No. 8 is the third and last of the so-called ‘War Sonatas’ – possibly less virtuosic than its predecessors, it has a wide emotional range, with unexpected depths. His final, ninth sonata Prokofiev wrote for Sviatoslav Richter, saying: ‘Don’t think it’s intended to create an effect.’ Often almost improvisatory, it was the last work he completed before the infamous 1948 decrees that disciplined many Soviet composers, and the first performance did not take place until 1951.

It seems that the enfant terrible Prokofiev, and his ‘Toccata-ness’ (as Russians like to put it) in particular, are still a great fit for
Kempf’s temperament, because he relishes the exuberance and nervous energy of the single-movement Third Sonata...The ebullient finale of the Eighth Sonata is also as buoyant and exciting as could be...But the Jekyll-and-Hyde characters of the Ninth Sonata are better captured when the colouristic range is wider.

this is a fine disc for fans of both Freddy Kempf and of Prokofiev, and with its deep and rich SACD sound is a release that will provide no shortage of enjoyment.