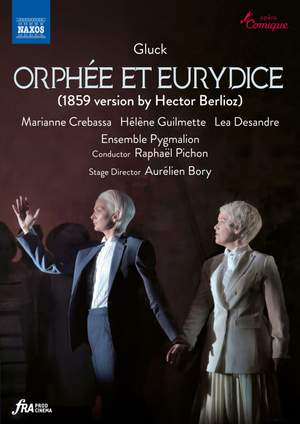 Mezzo-soprano Marianne Crebassa is a magnificent Orphée. Her bright, lyric mezzo is a bit more authoritative in the middle to upper registers than the lower one. But she sings with admirable... — Fanfare, May/June 2020 More…

Gluck’s influential Orphée et Eurydice tells the story of Orphée’s descent into the Underworld to retrieve his wife Eurydice. His singing has the power to overcome the guardian Furies, but the path of true love is shadowed by sorrow and tragedy. As a true ‘drama of the soul’ with intense psychological and emotive power, Orphée et Eurydice shook Enlightenment Europe to its core. Berlioz, in his 1859 version prepared for the Théâtre Lyrique, exploited the score’s full potential through a synthesis of the versions Gluck prepared for Parma, Paris and Vienna. Aurélien Bory’s Paris production was described as ‘just breathtaking’ by OperaJournal.

Mezzo-soprano Marianne Crebassa is a magnificent Orphée. Her bright, lyric mezzo is a bit more authoritative in the middle to upper registers than the lower one. But she sings with admirable beauty of tone and security throughout. Conductor Pichon is an equally effective interpreter in the elegant and more fiery aspects of Gluck’s score, and he coaxes marvelous, incisive performances from both the period instrument Ensemble Pygmalion and its parallel Chorus.

Crebassa, in a trouser suit and a grey wig that gives her a startling resemblance to Julian Assange, is magnificent...Cupid in a pink dress is hard to take, but Lea Desandre is good in a portrayal less skittish than usual. Hélène Guilmette, too, is good at expressing Eurydice’s lack of understanding. Raphaël Pichon and his chorus and orchestra are exemplary.

In this production we have a rising celebrity: French mezzo Marianne Crebassa... She sings with elegance and ideal tonal steadiness, and her acting of this scene is truly superb...This is a performance to treasure.

Raphaël Pichon conducts with extraordinary vigour and almost violence, a fascinating reading full of risks and surprises... Bory, Pichon and Crebassa combining to create a performance of rare fascination.