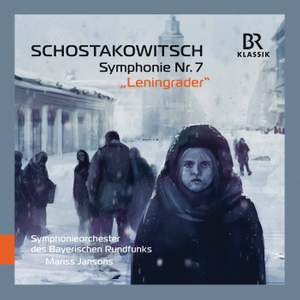 Dmitri Shostakovich was one of the most important composers of the 20th century. With his works - most notably his fifteen symphonies, which took Late Romantic music and transferred it to the modern age – he has shaped the repertoire. His aesthetic is determined by the impact of the Second World War and also by the political conditions in the Soviet Union under Stalin. Forced to work for the dictator, he also had to make numerous concessions to him.It was in the war year of 1941 that Shostakovich composed his Symphony No. 7 in C major, opus 60, named the “Leningrad” symphony because the composer dedicated it to his native city (now St. Petersburg once more). The marching theme in the first movement was composed even before the outbreak of the German-Soviet war, in around 1939 or 1940. He wrote further movements in Leningrad during its siege by German troops from September 8, 1941 onwards and finally completed the symphony in Kuibyshev (Samara) on the Volga, having been evacuated from the war-torn city together with his family on October 1, 1941. It was there on March 5, 1942 that the symphony received its premiere, performed by the similarly evacuated orchestra of Moscow’s Bolshoi Theatre under the direction of Samuil Samossud. The Moscow premiere on March 27 took place in perilous circumstances, but even an air raid alert could not convince the audience to go to the shelters, so captivated were they by the music. The music has retained its fascination to this day: the Seventh Symphony is considered Shostakovich's best-known work.Mariss Jansons, who ranks as a specialist in the Slavonic repertoire as well as the symphonic music of the 19th and 20th centuries, has tackled this masterpiece on numerous occasions. Under his baton, the musicians of the Symphonieorchester des Bayerischen Rundfunks here interpret Shostakovich's Seventh Symphony as a shattering testimony to the epoch in which it was written as well as a profound expression of our present age. The live recording of those concerts is now being released on CD by BR-KLASSIK in an exemplary interpretation of one of the most important symphonic works of the 20th century.