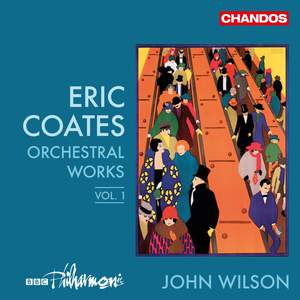 What Wilson doesn’t know about the inner workings of Coates’s methods isn’t worth knowing; and just as he has approximated the playing styles of American orchestras under the likes of Paul Weston... — Gramophone Magazine, November 2019 More…

Coates, E: The Jester at the Wedding: Suite

I. The Princess Arrives

II. The Dance of the Pages

IV. The Dance of the Orange Blossoms

VI. The Princess and the Jester

No. 1, I Pitch My Lonely Caravan

No. 2, Bird Songs at Eventide - I Heard You Singing

Coates, E: By the Sleepy Lagoon

John Wilson’s first album in a series of recordings of the orchestral works of Eric Coates, using his own definitive editions of the scores. includes the suites The Jester at the Wedding and London, and the miniature overture The Merrymakers. Infectiously idiomatic playing from the BBC Philharmonic! Eric Coates was born on August 27th, 1886, at Hucknall. Coates showed an interest in music at an early age, studying first the violin and then the viola with George Ellenberger, a pupil of Joachim, and harmony with Dr Ralph Horner in Nottingham. At the age of twenty he arrived in London determined to make a career in music despite some family misgivings. He won a scholarship to the Royal Academy of Music where he studied viola with Lionel Tertis and composition with Frederick Corder. Eventually, in 1919, when neuritis in his left hand made playing the viola more and more difficult, Eric Coates turned exclusively to composition. Eric Coates' work is in the tradition of polished melodic light music started by Sir Arthur Sullivan and continued by Edward German.

What Wilson doesn’t know about the inner workings of Coates’s methods isn’t worth knowing; and just as he has approximated the playing styles of American orchestras under the likes of Paul Weston and Nelson Riddle, so he has resurrected the warmth and vitality of our own finest vintage light orchestras. The music itself is incomparable.

John Wilson shows his enduring love and empathy with the uncrowned king of Light Music.

Wilson’s way with Coates is every bit as idiomatic and irresistible as his recent advocacy for Korngold with Sinfonia of London (and once again his ability to makes waltzes really dance makes me want to lobby for him to receive a New Year’s Day invitation to Vienna some day); every detail of the imaginative orchestration in The Jester at the Wedding registers loud and clear, and the two Symphonic Rhapsodies unfold with a Hollywood-esque grandeur.

this opener sets the standard – that Wilson is relishing every second of the music, that the BBC Phil is in great nick and that Stephen Rinker’s engineering brings sound of clarity and fidelity, every detail, dynamic and subtlety captured perfectly.