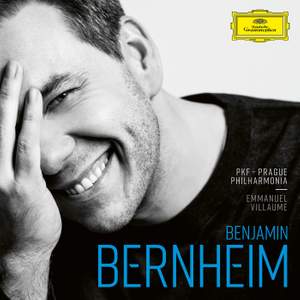 The first thing to say is that Bernheim has an immaculate natural voice – rich, flexible, mellifluous and nuanced. He is at his very best in French items from the later 19th century…Moreover,... — BBC Music Magazine, February 2020, 4 out of 5 stars (Performance) / 5 out of 5 stars (Recording) More…

"Fra poco a me ricovero"

The first thing to say is that Bernheim has an immaculate natural voice – rich, flexible, mellifluous and nuanced. He is at his very best in French items from the later 19th century…Moreover, throughout the disc he is supported by a superbly controlled and responsive orchestra.

Bernheim is a superb singer. The voice is handsome and beautifully regulated, and he sails through this taxing selection with ringing tone, true intonation and a seamless technique...It’s difficult to imagine many people today, if any, singing these arias better. But at the same time the selection suggests a lack of temperament.

On show throughout is a lyric tenor in complete command of precious qualities securely combined: youthful freshness; fine-grained ‘solar’ timbre, beaming light and warmth in all registers; ease across a wide tessitura and range of dynamics; purposeful amalgamation of tone and word; and an approach at once romantic, muscular and blessedly sure of aim to full-flow outpouring and high climaxes.

Impeccably sung and vividly characterised, this is a strong calling-card indeed from the young Frenchman, whose bright, focused sound put me a little in mind of the young Piotr Beczała or (rewinding a few decades) Georges Thill. The real magic happens in his native repertoire, particularly the extracts from Werther and the two Faust operas, but everything here is classily done – if only Alfredo’s aria from Traviata had been included in full.

He looks set to be the outstanding French tenor of our time. The arias from Werther, Roméo et Juliette, Manon, Faust, Berlioz’s Damnation and a rarity, Godard’s Dante, reveal a patrician artist whose marrying of words and tone brings a special magic to this underrated music...his native repertoire is golden-age singing. This is a disc for every opera lover’s Christmas wish list.

The Frenchman’s shimmering tenor glows in his native repertory.

Bernheim’s voice is fluid, supple and incredibly easy on the ear: he could sing a shopping list and make it sound elegant. There is a tendency to anonymity in his interpretation – his characters aren’t hugely delineated – but if you get the chance to see him live then rush. Emmanuel Villaume conducts with sensitivity.