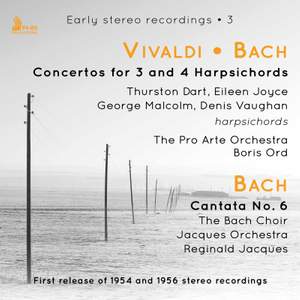 This is a most enjoyable programme, with excellent notes by Mahan Esfahani and Peter Bromley. — Gramophone Magazine, December 2019

Malcolm: Variations on a theme by Mozart for four harpsichords

I. Bide With Us

II. Thou, Whose Praises Never End

III. O Bide With Us, Thou Saviour Dear

V. Lord, to Us Thyself Be Shewing

Early stereo recordings, Vol. 2 (recorded 1954 and 1956) is the third of at least five volumes of EMI early stereophonic recordings, released in a joint venture with the Archive of Recorded Sound (ARS). The album includes the first releases in stereo of Vivaldi arr. Thurston Dart Concerto for 4 Harpsichords and Strings in D minor, the first release on CD of Vivaldi arr. Johann Sebastian Bach Concerto for 4 Harpsichords and Strings in A minor, BWV 1065 and the earliest stereo recording of The Bach Choir with the first release in any format of Bach’s Cantata, BWV 6.

EMI started to record in stereo in 1954 and all the recordings in this new series are from this historic period of recorded music. All the releases will appear for the first time in some form and feature many of the greatest classical artists of the time. Popular classical music figures of the mid-twentieth century, the artists on this disc would have been particularly familiar to the British concertgoer in this period.

George Malcolm, equally proficient as a conductor, pianist and composer and who with his unique brilliance brought the harpsichord to a place of universal respect in the concert hall; Thurston Dart was a eminent English musicologist, keyboard player and conductor; Ralph Kirkpatrick was celebrated American harpsichordist whose manner at the manner at the harpsichord is of a completely different sensibility than the others on this issue, from the flamboyant, Technicolor approach so enthusiastically championed by his British colleagues.

You could call this album a harpsichord extravaganza - indeed in George Malcolm’s ingratiating and inspired Variations on a Theme by Mozart for Four Harpsichords the instruments are shown-off superbly, and also in the splendid arrangement of Vivaldi’s Concerto in A minor, Op. 3/11 by Thurston Dart. The Bach Cantata No. 6 recording is a recent discovery and is the Bach Choir’s earliest recording in stereo.

The main booklet notes in this issue are written by eminent harpsichordist Mahan Esfahani.

This is a most enjoyable programme, with excellent notes by Mahan Esfahani and Peter Bromley.