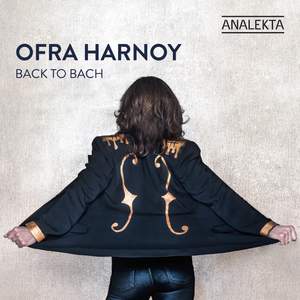 Handel: Sonata for Cello No. 3 in F Major

I. Adagio (Arr. for Cello and Brass)

Sonata for Cello No. 3 in F Major (Arr. for Cello and Brass): III. Largo

Sonata for Cello No. 3 in F Major: IV. Allegro (Arr. for Cello and Brass)

After suffering a debilitating shoulder injury from years of touring and endless recording sessions, cellist Ofra Harnoy underwent reconstructive surgery in 2015. A successful physical therapy allowed her to return to the stage in 2018 and, earlier this year, to start recording her much anticipated comeback album, Back to Bach. It is an album of profound musicality and passion which features Baroque favourites, such as Bach’s Air from Orchestral Suite No. 3 andBist du bei mir, as well as some lesser known gems from composers such as Allegri and Corelli.

“With this being my first new album since my hiatus, I am thrilled to be able to combine some repertoire from my earliest albums with works that I had not previously recorded. For this project, I was excited to explore the concept of creating a large cello ensemble by myself for some of the selections, and introduce the innovative approach of having the beautiful organ-like sound of a brass choir accompaniment for the rest, in order to realize my own personal vision of this music.” - Ofra Harnoy