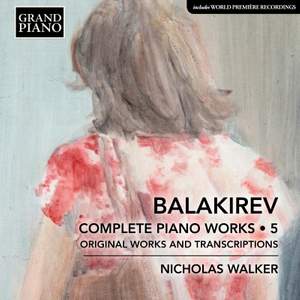 As in earlier installments of the series, this release enjoys vivid, realistic, full-bodied sound, with well-defined piano tone and ample color. Since this volume consists mainly of Balakirev’s... — Fanfare, May/June 2020 More…

Balakirev: Reminiscences from Glinka's "A Life for the Tsar"

Balakirev: Gondellied in A Minor

Balakirev: Tarantella in B Major

Balakirev’s appreciation of other composers is reflected in transcriptions that also reveal his brilliance as a pianist. With several world premiere recordings, this programme includes the marvelous balalaika sonorities and virtuoso colors to be found in operas by Glinka, the novel concept of dovetailing preludes by Chopin, and the richness of Beethoven’s string quartets. A plaintive Gondola Song, the relentlessly energetic Tarantelle and Balakirev’s earliest surviving piano opus conclude this fifth volume in Nicholas Walker’s acclaimed complete edition of his piano works. Nicholas Walker studied at the Royal Academy of Music and the Moscow Conservatoire. Winner of the first Newport International Piano competition, he has performed with major British orchestras, given recitals worldwide, and recorded for the BBC, BMG Arte Nova, ASV, Chandos and Danacord labels. He is also sought after as an imaginative and sensitive accompanist. In 2010 he organized the Balakirev Centenary concerts in London. He also teaches at the Royal Academy of Music.

As in earlier installments of the series, this release enjoys vivid, realistic, full-bodied sound, with well-defined piano tone and ample color. Since this volume consists mainly of Balakirev’s arrangements and revisions of music by other composers, it might seem less essential than the earlier volumes in the series, but those with a strong interest in this seminal Russian composer will want it nonetheless, and with Walker’s accomplished performances it offers rewarding listening.

This one is particularly fascinating for transcription junkies, beginning with the spectacular (and spectacularly difficult) Reminiscences on Glinka’s A Life for the Czar..Walker’s playing throughout this absorbing disc is a pleasure to hear, with a sophisticated tonal palette and eschewing any superficial virtuosity: ‘bravura with integrity’ is how I would describe it. Why don’t we hear more of him?