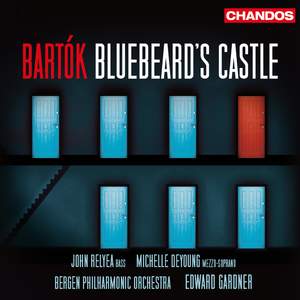 Gardner is extremely good at the ‘big moments’…But Bartok seeks extreme, unspoken reaches of the soul and the Bergen Philharmonic does not always seem to seek them with him…The two singers are... — BBC Music Magazine, December 2019, 3 out of 5 stars (Performance) / 4 out of 5 stars (Recording) More…

Following acclaimed performances around the globe, John Relyea’s interpretation of Duke Bluebeard now appears on record, with Michelle DeYoung as Judit and Edward Gardner leading his Bergen forces with aplomb. John Relyea continues to distinguish himself as one of today's finest basses. Mr. Relyea has appeared in many of the world’s most celebrated opera houses including the Metropolitan Opera, San Francisco Opera (where he is an alumnus of the Merola Opera Program and a former Adler Fellow), Lyric Opera of Chicago, Seattle Opera, Canadian Opera Company, Royal Opera House Covent Garden, Paris Opera, Bayerische Staatsoper, Vienna State Opera, Theater an der Wien, and the Mariinsky Theater.

Gardner is extremely good at the ‘big moments’…But Bartok seeks extreme, unspoken reaches of the soul and the Bergen Philharmonic does not always seem to seek them with him…The two singers are valiant and well-matched in tone (and vibrato), but John Relyea, though suitably powerful and very dark in timbre, can sound warm rather than sinister or enigmatic, and Michelle De Young, though strong and well controlled, comes across as imperious, rather than passionate or obsessive.

DeYoung’s voice has thickened slightly since her superb live recording with the Philharmonia, but [she] still possesses a formidable blend of heft and tonal beauty. She gives us a marvellously multifaceted Judith…I only wish Edward Gardner’s conducting was as characterful as the singing…Relyea’s Bluebeard is among the most moving – and human – on disc…Relyea is so impressive, in fact, that I’d urge anyone who loves this work to hear this recording, despite its flaws.

The Bergen orchestra under Edward Gardner and the two highly regarded singers are well up to the task of singing and playing Bartók’s complex score and Chandos have provided them with a dynamic and spacious recording.

A recording as fine as this new release does raise again the meaning(s) of Bartók’s great masterpiece: it comes across here as a psychodrama rather than a concert on disc...Gardner conducts a spacious account, superbly sustained right from the dark, atmospheric opening...Another reason for welcoming this is that it confirms John Relyea as one of the great interpreters of the title role.

The Bergen players capture all the score’s chill and terror, the glitter of the treasury, the dazzling magnificence of Bluebeard’s kingdom, the chirruping horror and sighs before the lake of tears: an agonising, vivid account.

a clear and polished sound...the main point of interest here is the orchestra under Edward Gardiner, which has a whale of a time with the tonal and polytonal excitements thrown at them.