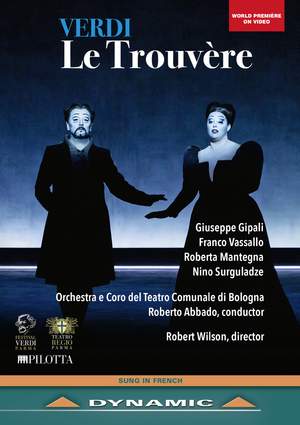 immensely moving... moments of comparative greatness and the involvement of the soloists is tangible. — MusicWeb International, January 2020 More…

After the great success that Il Trovatore received in Paris, Verdi was proposed to compose a French version of the opera to suit the tastes of the local public. The original work, based on the Spanish play El trovador by Antonio García Gutiérrez, had a libretto by Cammarano, which was translated into French by Émilien Pacini . Le Trouvère was first staged in Brussels in 1856 and premiered at the Paris Opera in 1857. In this new version the composer added some music in act 3 for the gypsie ballet scene, extended the finale of act 4 and made several other revisions. The plot is highly dramatic and captivating: Verdi portrays strong characters who deal with war, obsession and revenge. To use director Robert Wilson’s words “this is a family tragedy, and in many ways, it is a very contemporary story.” Wilson’s approach to the opera aims at preserving its emotional strength by using a very essential décor, whose main element is light: “As a director, when I design the stage and lighting, I think about if what I see can help me hear better. Le Trouvère requires a tremendous amount of concentration, so the set I designed is abstract in order to create a space for the music in the Farnese. I have designed an environment in concrete, creating a juxtaposition to the theatre’s ornate interior. […] Light in my work functions as part of the architectural whole. It is an element which helps us hear and see. Without light there is no space. To light a world that Verdi has described as so dark, one needs light to make the space darker.” In the set’s background the director also uses some photos by American photographer Robert Rosenkranz. This production was staged in the splendid Teatro Farnese of Parma, which was built in 1628 and belongs to the Complesso Monumentale della Pilotta, one of the oldest museums in Italy. Extra content: Interview with the curator of the Museum subtitled in all languages.

immensely moving... moments of comparative greatness and the involvement of the soloists is tangible.

Abbado’s cold-steel conducting does the score good service, lightening up for the ballet and drawing forthright playing and choral singing from his Bolognese forces. If some of his dramatic pauses are heart-stoppingly extended, that only enhances the staging’s epic dislocation of action and image.

Robert Wilson’s production might put some off, but on its own terms it is very slick. As ever, he uses lighting, stasis and monochrome to create a stylized and mysterious world where emotions are muted and the music is at the fore. It works surprisingly well with this story, and it certainly stops the wilder excesses of operatic over-acting. Roberto Abbado conducts an equally taut reading.