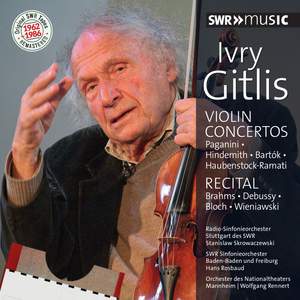 Sequences. Music for Violin and Orchestra

Ivry Gitlis began gave his first violin concert when he was only seven years old. When he was ten, the great violinist Bronislaw Huberman heard him play, and gave him a scholarship to study in Europe. The child moved to Paris with his mother and studied under such famous violinists as George Enescu, Jacques Thibaud, and Carl Flesch.; His internation career launched in 1951, when the press celebrated him at the Jacque Thibaud competition. He was awarded the “Grand Prix du Disque” for his first recording, Berg’s Violin Concerto.; These recordings are digitally remastered from the original recital recordings, and feature the Radio-Sinfonieorchester Stuttgart des SWR, and the SWR Sinfonieorchester Baden-Baden und Freiburg.