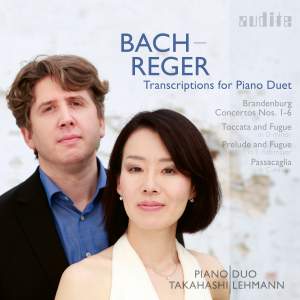 It’s many a long year since I enjoyed this marvellous, life-enhancing set [the Brandenburgs] so much. Who knew that Reger could be such fun? A great deal of this is down to the immaculate pinpoint... — Gramophone Magazine, December 2019 More…

This new release featuring the PianoDuo Takahashi|Lehmann presents rare repertoire for piano duo: the complete recording of Reger’s arrangements of the Brandenburg Concertos as well as other works by J.S. Bach.

Max Reger was a key figure in the Bach renaissance at the beginning of the 20th century. Because of his polyphonic compositional style, he was also revered by his followers as ‘the modern Bach’. “Sebastian Bach is for me the beginning and end of all music; upon him rests, and from him originates, all real progress!

That Bach could be misunderstood for so long is the greatest scandal for the ‘critical wisdom’ of the eighteenth and nineteenth centuries.” But it was not only as an interpreter of piano, chamber and orchestral music that he championed his musical role model throughout his lifetime, but also as the editor of several orchestral suites and concertos as well as the arranger of numerous organ works. Thomaskantor Karl Straube praised him for the “perfect manner in which he succeeded in reproducing the sound characteristics of the organ on the pianoforte.

It’s many a long year since I enjoyed this marvellous, life-enhancing set [the Brandenburgs] so much. Who knew that Reger could be such fun? A great deal of this is down to the immaculate pinpoint ensemble of Norie Takahashi and Björn Lehmann and the rhythmic buoyancy of their execution. With properly brisk tempos, the outer movements bubble along with an insatiable joie de vivre.

These two very skilful pianists lighten the textures, choose dancing speeds and crisp articulation, and create something that is quite delightful. So this is an enjoyably contemporary, rather postmodern collection.