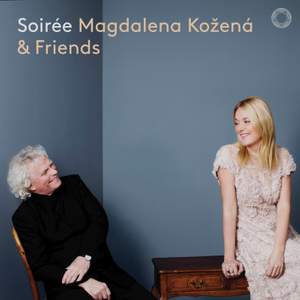 There is some lovely singing from Kožená, whose fawn-tinted mezzo retains its attractive quality from her earliest discs…She sings the two Brahms collections well, especially the Ophelia Songs,... — Gramophone Magazine, Awards Issue 2019 More…

No. 3, When Daisies Pied

The Czech mezzo is joined by her husband and assorted colleagues for a programme of songs for voice and chamber ensemble by Ravel, Brahms, Stravinsky, Chausson, Strauss, Dvořák and Janáček.

Soirée captures the atmosphere of informal, domestic music making. Czech star mezzo-soprano Magdalena Kožená offers an intimate and highly personal collection of international songs together with an outstanding group of musical friends, including Sir Simon Rattle, who makes his recording debut as a pianist.

Soirée is the second release of Magdalena Kožená’s exclusive collaboration with PENTATONE, after having presented the baroque cantatas recital album Il giardino dei sospiri in 2019.

There is some lovely singing from Kožená, whose fawn-tinted mezzo retains its attractive quality from her earliest discs…She sings the two Brahms collections well, especially the Ophelia Songs, and is at her best in her native Czech…The chamber-group support is refined and well-behaved…Rattle’s gentle, unforced pianism doesn’t get in the way and Wolfram Brandl’s soaring violin in Strauss’s ‘Morgen!’ is beautifully judged.

The concept seems a particularly apt one for the Czech mezzo, inside whom one often senses that there’s a frustrated instrumentalist trying to get out, and these smaller-scale canvases show this particular artist off to best advantage: Kožená’s light-coloured mezzo isn’t the largest of voices, and with these forces she has free rein to paint in subtle pastels...Everyone sounds like they’re having a blast, and it’s an absolute joy to eavesdrop.

Chausson’s Chanson perpetuelle makes a most arresting start, with Kozena’s throbbing mezzo riding the music’s darkening waves, supported by a string quartet and Rattle’s dappled piano...I wish the recording acoustic had been more intimate and less cloudy, but with Kozena in beguiling voice, and repertoire such as this, it’s still a pleasure and privilege to be invited, as it were, into the star couple’s home.

Kožená doesn’t possess the most voluptuous of mezzos – her tone is quite slender – but she is an artist with a vast range of colours, here demonstrated across a range of songs by Chausson, Dvořák, Brahms, Stravinsky, Ravel, Janáček and Strauss – the Janáček Říkadla (Nursery Rhymes) are particularly enjoyable, with their variety of pace and mood.