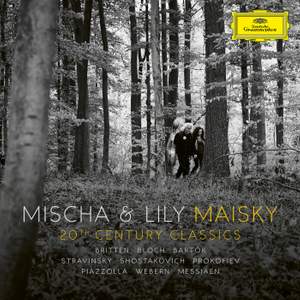 49. Dance of the Girls with Lilies (Arr. Vlasova for Cello and Piano)

Villa-Lobos: Bachianas Brasileiras No. 1 for at least 8 cellos

• The album takes listeners on a captivating journey through works from the 20th century. Original compositions and arrangements for cello reveal the diversity of an event-filled age with a cellist whose mastery of the cantabile and dance-like qualities ofthe repertoire is breathtaking

• Includes a second disc with a multi-track recording of Bachianas Brasileiras No.1 by Villa-Lobos, with Mischa playing all eight cello parts – a truly captivating interpretation

• Also on the CD2, a world premiere recording: The fascinating cello concert by Benjamin Yusupov, a recording with the Lucerner Sinfonieorchester under the direction ifthe composer himself.

• 20-page booklet with liner notes by musicologist Wolfgang Rathert (En/De), and a text by the composer Yusupov himself introducing his cello concerto (En).

The most interesting item here is a wild amalgam of folkderived dance music and orchestral rabble-rousing from Tajikistan-born Benjamin Yusupov...Maisky’s very individual brand of tonal intensity suits some pieces better than others, the Adagio from The Limpid Stream by Shostakovich responding especially well to his approach, Britten’s tragicomic Sonata too.