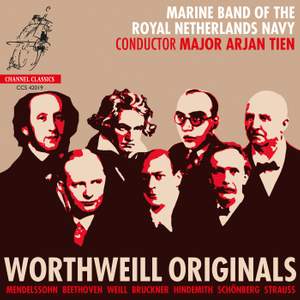 From the very first measures, it is obvious that this is a superb wind ensemble…Balances, usually a problem with bands and wind ensembles, are ideal: Everyone is heard but no one sticks out.... — Fanfare, March/April 2020 More…

Hindemith: Symphony in B flat major for Concert Band

I. Moderately fast, with vigor

Schoenberg: Theme and Variations, Op. 43a

II. Ballad of Mack the Knife

IV. Ballad of the Easy Life

Embarking on a series of recordings of classical originals for symphonic wind band is an adventurous quest. We decided to compile German-Austrian gems on this second volume, illustrating the development and expansion of the symphonic wind band of nearly one-and-a-half centuries: from Beethoven (1810) to Hindemith (1951).

Richard Strauss composed Variationen über ‘Wilhelm von Oranien’ in 1892. The former principal conductor of the Marine Band of the Royal Netherlands Navy, major Pieter Jansen, rediscovered this work in the archives of the Royal House of the Netherlands in 1999. It became our National Anthem in 1932, but the melody dates back to at least 1572. Another work on this CD that was published only twenty years ago is the beautiful and virtuosic Nocturne by Felix Mendelssohn-Bartholdy. Two marches by composers no less than Beethoven and Bruckner, should naturally be included on a CD by a military band, representing a different and lesser-known part of their repertoire.

In 2017 the Marine Band of the Royal Netherlands Navy appointed maestro Arjan Tien as its principal conductor and music director. Musicians and critics alike appreciate his interpretations for their warmth, energy and sensitivity, and he is widely considered to be one of the most versatile conductors of his generation.

From the very first measures, it is obvious that this is a superb wind ensemble…Balances, usually a problem with bands and wind ensembles, are ideal: Everyone is heard but no one sticks out. Credit Channel Classics’ engineers as well...this remains a stunning concert, for its unusual repertoire, its superb performances, and its dazzling recorded sound.