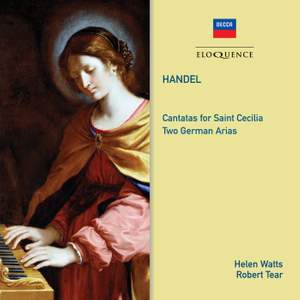 Recitative: Look down, look down

Of the works by Handel presented here, three are cantatas devoted to the Patron Saint of music, St. Cecilia, another is an Italian cantata that was probably presented for a private patron in Rome, while the remaining two works are drawn from Handel’s unique set of Neun Deutsche Arien (Nos. 4 & 6 in the supposed original numbering), composed around 1724 to texts by Barthold Heinrich Brockes, the Hamburg poet and city official whose vernacular text of the Passion was set to music by several eighteenth-century composers including Handel.

Brockes himself was pleased to note of the German Arias that ‘the world-renowned virtuoso, Mr. Handel, set these to music in a very special manner.’ They have attracted many fine singers on record, but few with so acute a feeling for Handel’s word-painting as the tenor Robert Tear. The three Italian cantatas composed between 1707 and 1737 and sung by the great Welsh contralto Helen Watts, display the singer’s complete command of Italian, her flair for dramatic declamation and her highly sophisticated and agile coloratura technique, surprising perhaps to those who hear in her voice the typical heavier English “oratorio” contralto sound.

The British harpsichordist, musicologist and conductor, Raymond Leppard directed these performances with Helen Watts from the harpsichord (built by Thomas Goff), with his colleagues of the English Chamber Orchestra providing stylish accompaniments. Watts lent distinction to many Handel recordings of the 1960s and 70s, including Messiah directed by Sir Colin Davis as well as pioneering recordings of Jephtha and Semele