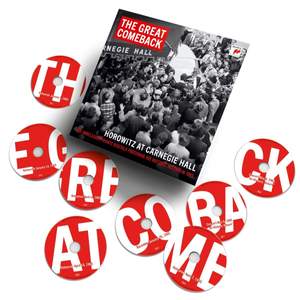 In many key respects listening to these 15 discs…is tantamount to enjoying ‘fly-on-the-wall’ access to Horowitz’s rehearsal methods, his way with alternate takes, his personality – by turns skittish... — Gramophone Magazine, Awards Issue 2019 More…

Debussy: Serenade for the Doll

Sony Classical is pleased to release a stunning new collection of previously unreleased private recital recordings proceeding Vladimir Horowitz’s historic comeback at the Carnegie Hall in 1965. Horowitz’s highly anticipated and critically acclaimed performance at Carnegie Hall came after a 12 year absence from the concert stage. This must-have release includes six unheard private recitals at Carnegie Hall, two complete studio sessions, and two remastered concerts in a special x15 CD edition. This remarkable collection is richly illustrated with previously unseen photo galleries portraying the events of spring 1965. Also included in this 212-page photo book are three new essays by Pulitzer Prize-winning music critic Tim Page, pianist Jed Distler and Horowitz scholar Bernard Horowitz, and full transcriptions of the conversations. Considered one of the world’s greatest pianists, Horowitz’s return to the concert stage in 1965 was met with acclaim from both fans and critics. Notable members of the audience included conductors Leopold Stokowski and Leonard Bernstein, pianist Van Cliburn, Metropolitan Opera director Rudolf Bing, and ballet stars Rudolf Nureyev and Margot Fonteyn. The recording of his recital at Carnegie Hall, released in 1966, was awarded with three Grammy Awards and became one of the most successful classical albums. Throughout his career Horowitz has won 25 Grammy awards for his recordings. He was posthumously awarded the Grammy Lifetime Achievement Award in 1990.

In many key respects listening to these 15 discs…is tantamount to enjoying ‘fly-on-the-wall’ access to Horowitz’s rehearsal methods, his way with alternate takes, his personality – by turns skittish and seriously focused – his childlike excitement and his endearing candour…Most of the playing is truly fabulous…It’s a priceless set, one to savour repeatedly.