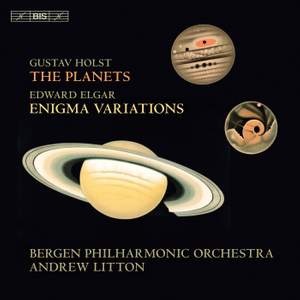 In Enigma, Andrew Litton is close-focused in detail compared to the familiar sweep of Boult’s recording, with very precise yet lively orchestral playing – notably in the swirling strings in ‘Troyte’…In... — BBC Music Magazine, October 2019, 3 out of 5 stars (Performance) / 5 out of 5 stars (Recording) More…

It is striking that two of the true classics in English orchestral music were composed within the short space of some fifteen years around the turn of the previous century. Edward Elgar's Enigma Variations have charmed as well as fascinated listeners since the first performance in 1899. In 14 remarkably diverse variations Elgar demonstrates his compositional mastery while creating miniature portraits of his closest friends, as well as of his wife and himself. By turns gentle, idyllic, tempestuous and boisterous, the pieces which often run seamlessly into each other nevertheless make up a coherent whole, like a group portrait taken during a country weekend. In 1916 Gustav Holst completed another set of musical character sketches his suite The Planets, in seven movements. These have little to do with astronomy and even less with the Roman deities whose names they carry. Holst was rather inspired by astrology and the suite actually concerns human character as influenced by the planets. Performing the programme in the warm acoustics of Bergen's Grieg Hall, the Bergen Philharmonic Orchestra under Andrew Litton give it their all in this sonic spectacular.

In Enigma, Andrew Litton is close-focused in detail compared to the familiar sweep of Boult’s recording, with very precise yet lively orchestral playing – notably in the swirling strings in ‘Troyte’…In the Planets, again, Litton offers refreshing insights in virtually every movement.

Litton with this fine orchestra would be my first choice in these works, hands down.

It’s a pleasure to hear non-English players perform them with such evident enjoyment and flair. Litton sets some broad tempos with the Elgar but revels in its brilliant detail, though I miss the timpani’s little tattoos in Variation 2.