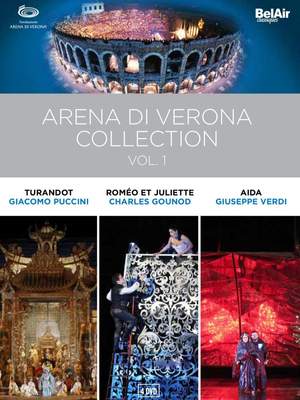 The strengths of this performance... are its musical standards, particularly the orchestra under the direction of Giuliano Carella whose dynamism and management of the sound picture is commendable,... — MusicWeb International, October 2019 More…

For their 88th year the prestigious Arena di Verona Festival paid tribute to internationally acclaimed Italian stage director Franco Zeffirelli. Zeffirelli delivers an opulent staging of the fairy-tale story of the Chinese Princess Turandot, who will only marry a prince capable of solving her riddles. Russian soprano Maria Guleghina gives a brilliant rendition of Turandot. Salvatore Licitra’s trump card is his imposingly radiant tenor voice of which he remains in sovereign control even in the role’s much-feared highest register. The soprano Tamar Iveri is a beautiful and sensitive Liù. Romeo et Juliette had not been performed at the Arena since 1977. The new production was entrusted to Italian director Francesco Micheli, who opted for a personal, highly original version: ‘‘An arena within the Arena, like a blood-red Elizabethan theatre. A senescent world that will not let its own children live.’’ Juliette is sung by Georgian soprano Nino Machaidze, returning to one of her early roles at the Salzburg Festival. Stefano Secco, often heard at the Opera Bastille in Paris and other international venues, is Romeo. Artur Rucinski interprets Mercutio, Romeo’s friend and the rival of Jean-Francois Borras’s Tybalt. The page Stephano is sung by soprano Ketevan Kemoklidze. Aida To celebrate the bicentennial of Giuseppe Verdi’s birth, La Fura dels Baus opens the ‘‘Centenario Festival 2013’’ of the Arena di Verona. Carlus Padrissa and Alex Olle sign a brilliant new version of Aida. Aida is the most popular opera at the Verona Festival, the only one performed every year, 17000 spectators enjoy the show every evening. This new production is designed by La Fura dels Baus. They transform the arena into a huge desert, creating mechanical animals and manufacture a solar power plant. They use their experience in leading large-scale shows and opera to create the Aida of the XXIst century splendidly conducted by a young talented conductor : Omer Meir Wellber.

The strengths of this performance... are its musical standards, particularly the orchestra under the direction of Giuliano Carella whose dynamism and management of the sound picture is commendable, as is the singing of the major roles.