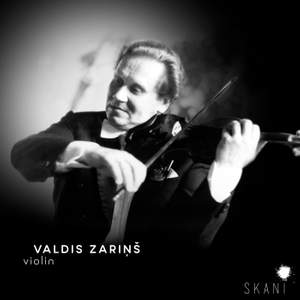 This double album presents historical recordings by violinist Valdis Zarins (1942 - 2018), one of the brightest yet still undiscovered stars of Latvian classical music tradition. Concerti by Sibelius (recorded 1988), Bartok (recorded 1976) and Kalsons (recorded 1979) are featured by Vassily Sinaisky conducting the Latvian National Symphony Orchestra. The newest recording of this album is Gundaris Pone's concerto lead by composer himself at the podium, recorded in 1990. Latvian Radio archive recordings by Sibelius, Kalsons and Pone see their world premiere release in this edition. Bartók concerto has been released previously on LP only and appears here under licence from Riga Recording Studio.

Inherent musicality, full tone, expressive phrasing, and the combination of emotion and intellect - it is with phrases such as these that music critics describe the style of superb Latvian violinist Valdis Zarins.

"His saturated tone can immediately be recognised on recordings, even amongst a hundred different violinists. And these recordings do not grow old. They still sound fresh. The secret is in their naturalness and simplicity. Not simplification, but simplicity," says cellist Ligita Zemberga, who was Zarins' colleague in the Philharmonic Chamber Orchestra and later in the Latvian National Symphony Orchestra.

I am very happy that you have the opportunity to listen to the recordings made by an outstanding musician- Valdis Zarins. For many years we have worked together in the orchestra where he was the concertmaster, but more importantly, I had numerous opportunities to be his accompanist in concerts where he was the soloist. His mastery of his instrument and his powerful interpretation of the music he played never failed to amaze. Latvia can be justly proud of a musician blessed with such a unique talent of which these recordings are a striking proof.