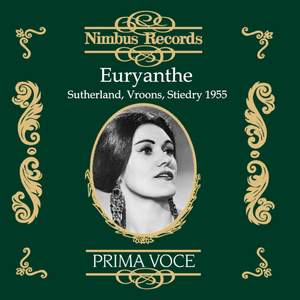 Sutherland could indeed have made a serious career in the dramatic German Fach: she sounds an outstandingly fluent and natural exponent of the titlerole. Conductor Fritz Stiedry’s preserved Wagner... — Gramophone Magazine, November 2019 More…

Despite the (mainly traditional) cuts, this 1955 BBC broadcast is treasurable. Not only does it feature Joan Sutherland’s touchingly pure and limpid Euryanthe – a role she only sang this once – but it also extends the small discography of Frans Vroons, in a lyric-heroic role which could have been written for him. Marianne Schech and Otakar Kraus are matchless villains, Kurt Bohme a comfortable King. Yet perhaps the performance’s prime virtue is the candescent conducting of Fritz Stiedry. His visionary readings of the familiar Overture and the desolate Prelude to Act 3 are heightened by unusually good broadcast sound, captured by the late Richard Itter on state-of-the-art equipment. This thrilling Euryanthe fully vindicates Weber’s – and Chezy’s –achievement.

Sutherland could indeed have made a serious career in the dramatic German Fach: she sounds an outstandingly fluent and natural exponent of the titlerole. Conductor Fritz Stiedry’s preserved Wagner performances are often a little spotty but here he seems in well-ordered control of everything. All the other major roles are on committed top form.

[Sutherland’s] fans will admire her clean, ample tone and the sheer ease at the top of her voice as part of a carefully vocalized performance. Her detractors will note the plummy quality of her tone and her indifferent textual articulation…Marianne Schech’s Eglantine is inevitably far more characterful…Though there’s the odd moment of untidy ensemble, the conductor Fritz Stiedry brings immense spirit to the fine overture.