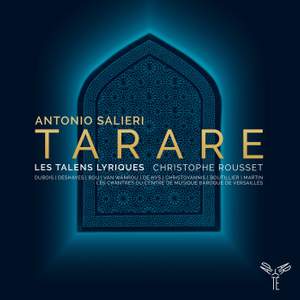 After Les Danaïdes and Les Horaces, Les Talens Lyriques concludes the group’s cycle of Antonio Salieri’s French operas with the world premiere recording of Tarare.  Often unfairly overshadowed by his brilliant contemporary Mozart, Salieri here composed a genuine masterpiece on the only libretto ever written by Beaumarchais.

Salieri has a taste for exoticism and, like Mozart in Die Entführung aus dem Serail, he transports us into a fantasy Orient seen through the eyes of the pre-revolutionary philosophy of the Enlightenment.

The indefatigable Christophe Rousset, unswerving in his efforts to revive scores that are rarely performed or have mysteriously languished in the shadows, directs a five- star cast: the Captain of the Guard Tarare (Cyrille Dubois) enters the palace of the Sultan Atar (Jean-Sébastien Bou) in order to rescue his beloved, the slave Astasie (Karine Deshayes). Behind the love triangle, one senses Beaumarchais’s indictment

of authority in his depiction (in 1787!) of the people’s revolt against the Sultan’s tyrannical power - so much so that it is astonishing that the plot escaped the royal censor’s net.

The music follows the story’s misunderstandings, plot twists and spectacular scenes to produce an opera that prefigures Romanticism, exhilaratingly performed by Les Talens Lyriques and Les Chantres of the Centre de Musique Baroque de Versailles. A release that should restore Salieri’s prestige once and for all.

Salieri shows great skill in carrying the drama forwards…Gluck is a constant presence…Dubois makes a first-rate Tarare…Deshayes is a passionate Astasie…Rousset conducts with an unerring hand: the sforzandos in the Overture to the Prologue have a Beethovenian force that grips the attention right from the start. Great stuff.

Rousset’s direction gives every indication of his total belief in the score…The outright star is the baritone Jean-Sebastien Bou, his finely articulated and rounded singing of Atar capturing every nuance of a complex role. Cyrille Dubois’s Tarare, another demanding role, is also very satisfyingly sung…But this is Bou’s triumph, total in its overall projection of an evil but many-sided character.

A score of beguiling instrumental variety and dramatic momentum...brilliantly brought to life by Rousset and his cast.

Christophe Rousset guides his forces through the myriad turns of pace with alacrity, and the cast is strong. Tenor Cyrille Dubois and mezzo Karine Deshayes take the heroic roles with elegance, Jean-Sébastien Bou relishes the villainy of Atar, and Enguerrand de Hys’ Calpigi is so amusing that one almost overlooks his solid technique.