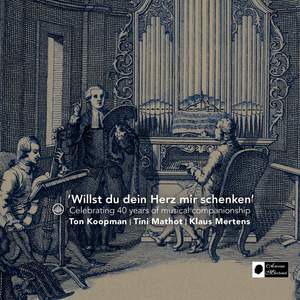 2019 – An Anniversary Year. For three exceptional musicians 2019 brings cause for great joy and gratitude for several reasons.

He also looks back on 40 highly successful years with the ensemble he founded, the Amsterdam Baroque Orchestra.

His wife, Tini Mathot, an outstandingly gifted harpsichord and fortepiano virtuoso as well as a very successful producer of countless international CDs, celebrates her 70th birthday.

Klaus Mertens, acclaimed for over four decades as an international concert singer with an admirably wide repertoire stretching from Monteverdi to contemporary composers, also celebrates his 70th birthday. “As the ideal conveyor of Bach’s cantatas and passion texts…” he also receives the Bach-Medaille of the city of Leipzig in 2019.

As if this were not sufficient cause to celebrate an anniversary, these three musicians cap it all by looking back on 40 years of successful and amicable music-making together in concerts and recording studios by presenting an anniversary CD as well as several chamber concerts.