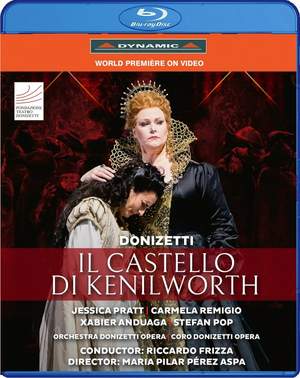 Jessica Pratt’s Elizabeth takes a while to hit form, while as her rival Amelia Carmela Remigio is both physically and vocally expressive, offering liquid tone. As the two-timing Earl of Leicester,... — BBC Music Magazine, September 2019, 3 out of 5 stars (Performance) / 4 out of 5 stars (Recording) More…

Recorded during the 2018 Donizetti Festival, Il Castello di Kenilworth was first staged at Naples’ San Carlo in 1829. Drawn from a novel by Sir Walter Scott and adapted by librettist Leone Tottola, this rare opera was unjustly long neglected. This recording features the original version, with the role of Warney entrusted to a tenor (which the composer changed into a baritone in the 1836 revision of the score).Il Castello di Kenilworth is the first of the several successful works to follow that Donizetti based on British history, introducing the character of Queen Elizabeth I, torn by the inner struggle between a monarch’s duty and a woman’s feelings. The fundamental pivot of the drama is the antagonism between the two female characters who both dwell and suffer in their loneliness, in a male-dominated world. The performance received excellent reviews, praising the richness of the costumes, the sobriety of the stage setting, and, mostly, the vocal and acting skills of the whole cast, which features first-rate singers like opera stars Jessica Pratt and Carmela Remigio, who share the stage with talented tenors Stefan Pop and emerging talent Xabier Anduaga “A first-class cast, with an imaginative production team, under the musical direction of Riccardo Frizza, have been assembled, and it is not an exaggeration to say that together they have produced a compelling case for “Il Castello di Kenilworth” to be given further consideration. […] It was musically engaging, full of bel canto charm, with some wonderful melodies, and notwithstanding its formulaic format, was dramatically convincingly. (Alan Neilson – Operawire)

Jessica Pratt’s Elizabeth takes a while to hit form, while as her rival Amelia Carmela Remigio is both physically and vocally expressive, offering liquid tone. As the two-timing Earl of Leicester, tenor Xabier Anduaga exhibits expert singing, though he’s a rather basic actor…Frizza knows exactly how such pieces go and holds the performance together with skill.

Admirers of Donizetti – and we are many – should definitively give it a listen.