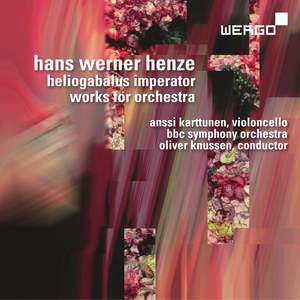 It’s hard to imagine finer performances than we get here, and the BBC recording captures everything well. Strongly recommended for Henze fans, and for those who aren’t. — Fanfare, January/February 2020 More…

The relationship between Hans Werner Henze and Oliver Knussen was one of great mutual respect. The German composer admired the British conductor and composer for electrifying performances of Henze’s own and other composers’ works. Knussen was an untiring and enthusiastic champion of his friend Henze’s music. The recordings collected here display Knussen’s deep understanding of Henze’s music. Knussen conducts the BBC Symphony Orchestra in sensitive and meticulous performances of compositions ranging from the composer’s middle period to his last completed work. Los Caprichos transforms the bitterness and sarcasm in Francisco Goya’s famous series of etchings into a tender and melancholy “Fantasia per orchestra” that makes only sparing use of contemporary stylistic devices. The large orchestral work Heliogabalus Imperator – a programmatic depiction of the life and death of the notorious Roman Emperor Marcus Aurelius Antoninus – also provides evidence of Henze’s self-assured and idiosyncratic interpretation of modern music idioms. The Englische Liebeslieder for solo violoncello and orchestra express a wide range of emotional states, which are brought to life by cellist Anssi Karttunen.

It’s hard to imagine finer performances than we get here, and the BBC recording captures everything well. Strongly recommended for Henze fans, and for those who aren’t.

Knussen was a notable explicator of Henze’s dense orchestral music, and here are three substantial essays and the solid Ouverture zu einem Theater.

It’s dominated by a fabulously vivid account of the half-hour long “allegoria per musica” Heliogabalus Imperator, a symphonic poem of almost Straussian vividness portraying the violent life and death of the Roman emperor Elagabalus.

This present collection of Henze’s music was recorded in 2014 with the BBC Symphony Orchestra (on excellent form) in the wake of Henze’s death. Now it also forms a memorial to Knussen’s unique gifts as a conductor.

Prime among them was a precious and surgical skill in polishing and balancing sonorities so that every element stays crystal clear…How good it is to have this necessary and important album — contemporary music at its ebullient, intoxicating best.