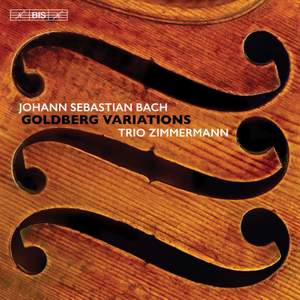 No complaints about the expertise and fluency of the Zimmermanns’ playing. Their approach to dynamics is refreshingly flexible, and all three players bring a graceful approach to ornamentation…But... — BBC Music Magazine, August 2019, 4 out of 5 stars (Performance) / 5 out of 5 stars (Recording) More…

For close to 300 years Bach’s Goldberg Variations have awed performers as well as listeners, through an unparalleled combination of a dazzling variety of expression and breath-taking virtuosity with stupendous polyphonic mastery. No wonder then that other musicians than harpsichordists have wanted to make it their own – pianists, first and foremost, but also accordion players and guitarists, flautists and harpists. Having performed and recorded much of the classical as well as the modern string trio repertoire, Trio Zimmermann began working on the Goldberg Variations several years ago, playing an existing arrangement. But in their own words, the three members – among the leading string players of our time – ‘soon became captivated by the original score and its innumerable beauties and details’. As a result they have jointly prepared a performing version which here receives its first recording. Playing an important part on this album are also the Trio’s instruments – all by Antonio Stradivarius, and featured in close-up on the cover.

No complaints about the expertise and fluency of the Zimmermanns’ playing. Their approach to dynamics is refreshingly flexible, and all three players bring a graceful approach to ornamentation…But in a work as extensive as the Goldberg Variations it is inevitable that interpretation will not always satisfy…This very well recorded performance is something of a mixed bag, then, but offers much enjoyment and insight.

The faster variations are played with infectious high spirits, and in the so-called “Black Pearl” variation (No. 25) there is almost as much introspection as one would expect to hear in a performance on a harpsichord or a piano. The final variation, the Quodlibet, could have been played with more earthy humor, but it is consistent with the spirit of this performance overall. Given the elegance of the playing, and the performers’ obvious concern for maintaining a period style, it is hard not to recommend this recording, even if it is played on the “wrong” instruments.

They play each note detached, and with pure tone. Whatever the intent, the effect is of an anachronistic viol consort with the tools but not the inclination to join the dots…Where their version flourishes in a string-specific way is in the matter of ornamentation.

My new reference for this work on anything other than a keyboard.

immaculately balanced in a lively yet radiant acoustic.... The ensembles declared intention was an ‘unveiling’ of Bach’s masterpiece – the result is a triumph of combined technical ingenuity and musical insight.