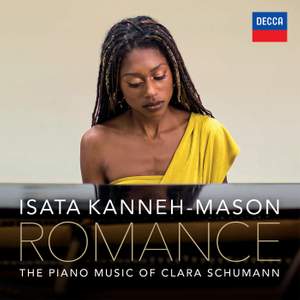 She is a pianist who makes lines sing beautifully and virtuosic passages dance, finding intimacy and eloquence at telling moments…[in the Concerto] Kanneh-Mason matches what we know of Clara’s... — BBC Music Magazine, September 2019, 4 out of 5 stars More…

The 24-year-old pianist makes her debut on Decca with a bicentenary tribute to one of the nineteenth century’s most remarkable women, including the Piano Concerto which she completed at sixteen and premiered with Mendelssohn and the Gewandhausorchester.

The pianist talks to Katherine about her debut solo recording, released to commemorate Schumann's bicentenary this year.

Big sister to superstar cellist Sheku Kanneh-Mason, 22-year-old Isata is a postgraduate student at The Royal Academy of Music, where 4 of the Kanneh-Mason siblings are currently studying! As an undergraduate, she held the prestigious Elton John Scholarship, performing with Sir Elton John in Los Angeles in 2013. Isata reached the final of the Piano Category in the 2014 BBC Young Musician competition, and has gone on to develop a substantial live career a solo artist, with concerto appearances, recitals and chamber concerts throughout the UK and internationally. When not performing in her own right, Isata makes up a third of The Kanneh-Mason Piano Trio with her brothers Sheku and Braimah

She is a pianist who makes lines sing beautifully and virtuosic passages dance, finding intimacy and eloquence at telling moments…[in the Concerto] Kanneh-Mason matches what we know of Clara’s own approach, which was to forget ego and put everything at the service of the music, ably matched by the RLPO and conductor Holly Mathieson.

It ranks among the most charming engaging debuts I can recall…She brings weight and emotional heft to this uneven work [the Concerto] that are entirely convincing, and is well matched in the exuberant finale by Holly Mathieson and the RLPO…but it is the performances of the two song transcriptions that show what a gifted musician Kanneh-Mason is.

[Piano Concerto] Kanneh- Mason’s interpretation is as convincing as any of the nine rivals available, nicely balanced throughout, with some beautiful playing in the slow movement by cellist Jonathan Aasgaard. Two transcriptions by Clara of her husband’s finest songs are also very nicely played, but it is in Clara’s own solo piano music – the 3 Romances Op 11, the Second Scherzo and the Sonata written as a present for her husband – that Kanneh-Mason is at her most persuasive. If you buy only one disc of Clara Schumann in her bicentenary year, this is the one to have.

Kanneh-Mason captures it all beautifully, and with real sympathy and affection: phrases that could sound slightly four-square in lesser hands are coaxed into bloom with subtle rubato, and in that helter-skelter finale she exudes all the joyful exuberance of a teenage girl set to take on the world.

Kanneh-Mason’s boldly assertive playing makes an excellent case for all of this music, in which the influence of Robert Schumann seems much less significant in the piano writing than that of Chopin particularly

Kanneh-Mason brings real verve and excitement to both opening allegro and the romping finale [of the Concerto]...Her innate sense of shape and line are apparent again in the Piano Sonata in G minor...Kanneh-Mason invests its singing opening with an almost reverential delicacy, interrupted with restless bursts of youthful energy.

Ms. Kanneh-Mason’s account of Schumann’s Piano Concerto is more than convincing, but her performances of the solo piano works, especially this magical Scherzo, are even better.