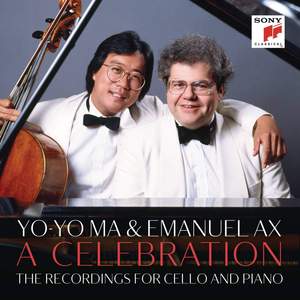 The Recordings for Cello & Piano

Beethoven: Quintet in E flat major for piano and winds, Op.16 (arranged for piano quartet by the composer)

Corigliano, J: Phantasmagoria on 'The Ghosts of Versailles'

Mendelssohn: Song without Words, Op. 38 No. 6 in A flat major 'Duetto'

A x21 CD box-set released on the 'Sony Classical' label - In celebration of the internationally acclaimed pianist Emanuel Ax’s 70th birthday and his long-term musical partnership with revered cellist Yo-Yo Ma, Sony Classical is pleased to release. This must-have box set sees their complete recordings for Cello and Piano ,originally released on Columbia Masterworks/Sony Classical, released in a single edition for the first time. This stunning box set features exquisite performances of works by revered composers Chopin, Mozart, Beethoven, Schubert, Prokofiev and Rachmaninov. Emanuel Ax and Yo-Yo Ma’s friendship began when they were both studying at the prestigious Juilliard School in New York. The duo have gone on to produce numerous critically acclaimed recordings together. Included in this exquisite box set are the duo’s Grammy award winning recordings of Beethoven: Cello and Piano Sonata No. 4 in C & Variations; Brahms: Cello and Piano Sonatas in E Minor and F and Brahms: Sonatas for Cello & Piano (Op. 38, 99 and 108).