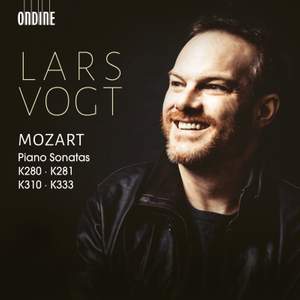 Vogt strikes a fine balance between lyricism and brilliance, teasing out meaning through ebb and flow, relishing the tenderness of the slow movements yet without excessively loosening the corsets... — BBC Music Magazine, August 2019, 4 out of 5 stars (Performance) / 3 out of 5 stars (Recording) More…

After a cycle of Beethoven Piano Concertos, solo albums of works by Bach and Schubert in addition to a number of award-winning recordings of piano chamber music on Ondine label, pianist Lars Vogt releases an album of Piano Sonatas by Wolfgang Amadeus Mozart (1756–1791). In this album, two baroque-influenced and virtuosic early sonatas are coupled together with a touching A minor Sonata, K310 – written at the time of the composer’s mother’s death – and a delightful, Haydnesque Sonata K333.

Mozart wrote Piano Sonatas K280 and K281 (nos. 2 & 3) most likely in 1774, at the age of 18. The elements of Baroque influence are clearly evident in the K280 Sonata. A prominent feature in the K281 Sonata is, besides its virtuosity, the beautiful slow-movement, Andante amoroso. The K310 Sonata (no.8) was written four years later, during the summer of 1778, and is written in a minor key: a rarity among Mozart’s Sonatas. The K333 was published in 1784, but the time of its composition might have been earlier. This joyful work with virtuosic passages can be described almost as a Piano Concerto for the solo piano.

Vogt strikes a fine balance between lyricism and brilliance, teasing out meaning through ebb and flow, relishing the tenderness of the slow movements yet without excessively loosening the corsets of 18th-century poise. The sound quality is unfortunately rather dry, but it is a delightful listen all the same. These pieces tend to grow on you until you suddenly realise you can’t do without them.

Today the pianist seeking to delivery some plausible representation of Mozart's musical imagination on a modern instrument must do so with a fearless blend of compromise, adjustment and conjury. Lars Vogt certainly possesses all these qualities [...] This is richly communicative Mozart-playing, capturing a youthfulness touched with wisdom.

Vogt’s readings are polished and insightful throughout, relishing the lyricism of the slow central movements…