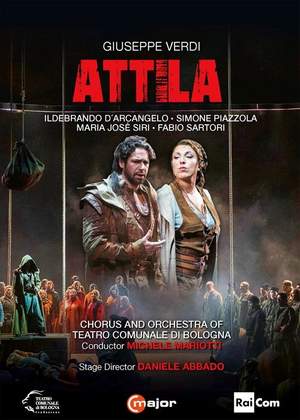 Mariotti coaxes suitable delicacy and drama from the Orchestra of the Teatro Comunale di Bologna in a consistently assured reading of the score. Daniele Abbado’s 2016 production is vaguely Game... — BBC Music Magazine, August 2019, 4 out of 5 stars More…

Verdi's opera Attila takes as its starting point Attila’s plans to storm Rome with his army of Huns and the Romans’ attempts to prevent him. As with Nabucco and I Lombardi, Verdi spiced up the action with a number of patriotic choruses, guaranteeing that – against the background of the Italian movement for unification – the opera was a great success. 'Michele Mariotti owes much to the fact that this evening became a celebration of voices' (Opern-Kritik). Ildebrando D´Arcangelo is 'perfect for the serious Verdi roles', Fabio Sartori has a voice of immense brilliance' (Opern-Kritik), 'Simone Piazzola was an impressive Ezio' (theoperacritic.com) and 'the real warrior of this Attila is the soprano Maria Jose' Siri … with her voice, touching each primordial sentiment in every note of the opera, she commanded ‘Attention’ from everybody' (La Repubblica).

Mariotti coaxes suitable delicacy and drama from the Orchestra of the Teatro Comunale di Bologna in a consistently assured reading of the score. Daniele Abbado’s 2016 production is vaguely Game of the Thrones with a few inexplicable contemporary touches…Siri is sensational as Odabella, immensely powerful in both voice and stance, every facial expression nuanced…[d’Arcangelo] exudes psychological angst and vocal authority.

D’Arcangelo lacks the gritty edge to make his Attila truly fearsome, but the flipside of this is that his limpid, idiomatic delivery of Solera’s libretto fives the character warmth and humanity…There’s more fire from María José Siri’s Odabella, gutsy in attack and affecting in more lyrical repose, if just occasionally wavering off pitch.

A valuable addition to any Verdi collection.

Daniele Abbado’s misty, modern-dress staging offers a grim representation of war…The cast is entirely worthwhile. With his strong presence and vigorous tone, Ildebrando d’Arcangelo wins an unequivocal success in the title-role. A thrilling physical as well as vocal participant, Maria Jose Siri attacks the role of Odabella with her fearless soprano.