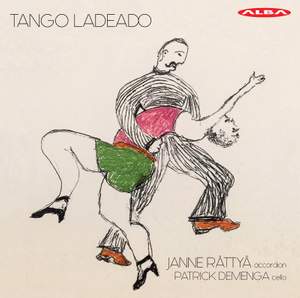 On Tango Ladeado accordionist Janne Rättyä leads the listener into the world of tango with the assistance of cellist Patrick Demenga on the final track. This album includes rare, previously unreleased tango gems from various composers from 1757 to 2017. It represents a collection of some of Rättyä’s favorite tangos among those which became the backbone of his concert programs, the pièces de résistance. Classical accordionist Rättyä went through an inner battle before diving into the project, for he had previously avoided any association with popular music genres like the tango. Privately, though, he did enjoy slumming in this genre once in a while, and slowly he began to discover tangos written by serious composers, some of which found their way onto regular recital programs. In the years following, a number of new tangos emerged and several composers contributed their own arrangements or suggested arrangements for him to work on. In the older tangos of his repertoire the original tango idiom is clearly present.