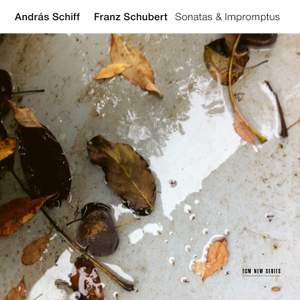 There are moments when the music seems to call for a grandeur which this instrument can't produce, but with this recording Schubert's pianistic world is fundamentally transformed. — BBC Music Magazine, July 2019 More…

The Hungarian-born pianist brings introspective poetry to two late sonatas, the Four Impromptus D899 and the Drei Klavierstücke D946, recorded on his Franz Brodmann fortepiano from 1820.

In the latest chapter in Sir Andras Schiff’s ongoing documentation of Franz Schubert’s music, the great pianist plays the Four Impromptus D 899, and compositions from 1828, the last year of Schubert’s too brief life: the Three Pieces D 946 (“impromptus in all but name” notes Misha Donat in the CD booklet), the C minor Sonata D 958 and the A major Sonata D 959.

Schiff again chooses to use his fortepiano made by Franz Brodmann in Vienna, around 1820. “It is to me ideally suited to Schubert’s keyboard works,” he has said. “There is something quintessentially Viennese in its timbre, its tender mellowness, its melancholic cantabilita.”

Critics have agreed, unanimous also in their praise of Schiff’s interpretations: “I cannot think of anyone of his calibre who has mastered the fortepiano as well as the modern piano and shown such distinction on both,” wrote Stephen Plaistow in Gramophone. “In Schubert Schiff has a claim to be considered sovereign among today’s players, carrying forward the reading and interpretation of him into areas that others have not fully explored.”

Among other accolades, the first volume of Schiff’s exploration of Schubert on fortepiano was ‘Recording of the Month’ in both BBC Music Magazine and Gramophone, ‘Editor’s Choice’ in Classical Music magazine and International Piano’s ‘Choice’.

There are moments when the music seems to call for a grandeur which this instrument can't produce, but with this recording Schubert's pianistic world is fundamentally transformed.

The colours are more or less dictated by the instrument… But instead what magical melancholy, and above all modesty, it enables…Schiff is a true master of the instrument and knows how to connect its resources to his individual, yet never mannered, Schubertian vision…If your concern is for emotional Schubertian truth, uniquely illuminated, Schiff’s new discs are boundlessly rewarding.

The Brodmann has a somewhat edgy tone, verging on clatter in its higher range, very unlike a modern grand piano. It is close to the sound-world Schubert would have had in mind when penning these works, and the instrument’s lesser power allows for greater intimacy and a softness of tone reminiscent of a guitar. This quality runs through the Klavierstücke and the slow movements of both sonatas. Schiff’s playing is sublime throughout but powerful when the need arises. Excellent sound.

Schiff defines Schubert by ‘his modesty, his humility, his lack of ego’; the same qualities are evident in every bar of these performances, which quietly command absolute attention rather than clamouring for it. These are profoundly affecting interpretations born out of a long-term loving relationship with both music and instrument, and ones to which I can see myself returning for years to come.

At first, the repeated drumming left-hand chords in the C minor Impromptu (which opens the set) grated, then my ear adjusted and took increasing pleasure in the four-pedal instrument’s rich variety of tone.

I can’t remember being so spellbound by a performance’s last note than I was by the sounds slowly fading from Andras Schiff’s fingers in Schubert’s A major Piano Sonata, D.959...Never a pounding virtuoso, Schiff responds intuitively to the wandering, intimate thoughts in these sonatas and impromptus from the end of Schubert’s life. So, uniquely, does Schiff’s gentle piano: perfect for leading the listener into the heart of this extraordinary music.

There’s a magisterial freedom of expression in performances of intelligence, emotional engagement and penetrating musicality. If you only know Schubert on the pianoforte, these marvellous accounts open up endlessly fascinating new vistas.