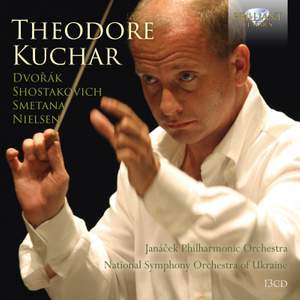 III. Variations: The Dance of the Drayman

Shostakovich: The Golden Age, Suite from the Ballet, Op. 22a

Shostakovich: Hamlet - Concert suite from the film score, Op. 116a

II. The Ball at the Palace

IV. In the Garden

VI. Arrival of the Actors

VIII. Duel and Death of Hamlet

Shostakovich: The Gadfly Suite, Op. 97a

No. 4. Z ceskych luhu a haju (From Bohemia's Woods and Fields)

Act III: Dance of the Comedians

Smetana: Nasim devam (To Our Girls)

• This set brings together the recordings conductor Theodore Kuchar made for Brilliant Classics: the complete symphonies by Carl Nielsen, the Symphonic Poems by Dvorák, the orchestral works by Smetana, ballet suites by Shostakovich and a recording of Latin American classics. All these recording have met with enthusiastic critical acclaim: “10/10: first recommendation in this repertoire..terrific sonics..irresistable package..”(Classicstoday on Shostakovich), “Theodore Kuchar is an extremely exciting and talented onductor..thrilling, with uninhibited abandon”(Classicstoday on Dvorák), “Theodore Kuchar leads what is without question the most exciting complete Nielsen symphony cycle available,

9/9”(Classicstoday on Nielsen), “with plenty of enthusiasm and vigor..hard to beat..one of the best versions available..”(Classicstoday on Smetana). The Latin-American program was nominated for a Latin Grammy.

• Theodore Kuchar (1963) was born in New York. He studied the viola and conducting, and was for a period principal violist of the Cleveland Orchestra. He is one of the most sought-after conductors of his time, active with the Symphony Orchestra of the Ukraine, Janacek SO, Venezuelan SO and others.