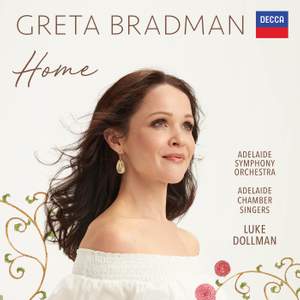 trad.: Let Us Break Bread Together

Bradman: Every Day Is A Rainbow Day For Me (Arr. Richard Mills)

Charles, E: When I have sung my songs

2. The Nightingale and the Rose

Flotow: The Last Rose of Summer

No.3 Sure On This Shining Night - Andante

reviews and topped the classical and classical crossover ARIA charts for several months.

This brand new album Home (c. Luke Dollman; Adelaide Symphony Orchestra), released this year, has also met similar success on the ARIA charts. The album is a touching suite of pieces that root her to her family, from “O Waly, Waly” and “Songs My Mother Taught Me” that transport her to the farm where she grew up, to memories of her grandmother through “The Last Rose of Summer”.

“Every Day Is A Rainbow Day For Me”, written by Greta’s grandfather, the Australian cricket legend Don Bradman, for his wife, is a particularly charming moment, and performed in a magical arrangement by Australian composer/conductor Richard Mills.

The album finishes with a gorgeous version of Auld Lang Syne, in which Greta is accompanied by the Adelaide Chamber Singers singing an a capella version arranged by their Director Carl Crossin.