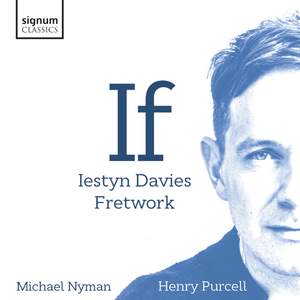 The Nyman performances are exemplary – crisp and cleanly articulated from Fretwork and dispatched by Davies with a vacant, unrippled purity that is so essential to the music, and must be hard... — Gramophone Magazine, May 2019 More…

II. No Time in Eternity

IV. The Definition of Beauty

Nyman: Music After a While

Nyman: The Self-Laudatory Hymn of Inanna and her Omnipotence

The countertenor talks to David about his new album with Fretwork, playing off the juxtaposition of baroque works by Henry Purcell with works by contemporary composer Michael Nyman.

When Michael Nyman started reinventing the English baroque back in the 1980s, one critic described the result as “pump-action Purcell.” This recording combines these two singular musical styles through the stunning voice of countertenor Iestyn Davies and viol consort Fretwork, serving as the bridge across three centuries.

The programme combines bold harmonies, wondrous inventions and melodies that will haunt your dreams - whether from the 17th Century or the 21st. Recorded following a concert tour of the programme, the disc includes the premiere recording of a new commission from Michael Nyman, Music after a While - based upon Purcell’s song, or more particularly upon its strikingly original bassline, with its insidious rising chromatics.

“This was a near-perfect concert, contrasting two composers whose links are stronger than many people might think and performed by musicians at the top of their profession.” - Early Music Reviews

The Nyman performances are exemplary – crisp and cleanly articulated from Fretwork and dispatched by Davies with a vacant, unrippled purity that is so essential to the music, and must be hard won for this instinctively expressive performer… All [of the Purcell songs] are immaculately sung by Davies, whose Peter Pan voice sounds fresher and smoother than ever.

Nyman’s art has finesse and more...The instrumental Music After a While, here following its Purcell model, thoroughly entices in its complexity.

Purcell’s Evening Hymn showcase Davies’s famed vocal purity, but so too does the exquisite title song, Nyman’s If...Anyone who thinks Nyman’s music stops at his hallmark pulsing rhythms and prominent bass lines will find variety and introspective beauty here, all executed with perfection.