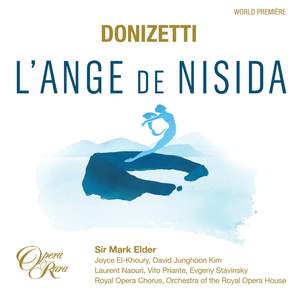 It’s Joyce El-Khoury as Sylvia, the King’s mistress, and David Jonghoon Kim’s Leone, the young man in love with her, who steal the singing honours. Their last act duet when all that awaits them... — BBC Music Magazine, June 2019 More…

Sir Mark Elder conducts the world premiere of Donizetti’s opera semiseria from 1839, composed for a theatre which closed down before the opening night, but subsequently heavily revised as La favorite.

The conductor talks to Katherine about the world premiere recording of Donizetti’s 1839 opera, released tomorrow on Opera Rara with Joyce El-Khoury in the title-role.

Opera Rara presents, 179 years after it was written, the world premiere recording of a Donizetti ‘lost’ masterpiece, restored and brought thrillingly back to life. Written in 1839 for the Theâtre de la Renaissance in Paris, rehearsals started but the theatre went bankrupt and the opera was never performed – until 2018. Taken from two acclaimed concert performances at the Royal Opera House, L’Ange de Nisida is a fascinating and passionate drama, full of exciting vocal writing, composed by Donizetti near to the end of his life.

It’s Joyce El-Khoury as Sylvia, the King’s mistress, and David Jonghoon Kim’s Leone, the young man in love with her, who steal the singing honours. Their last act duet when all that awaits them is death or a monastery could wring tears from a stone.

Mark Elder conducts this attractive score with love. There’s an irresistible bounce to the lighter passages and he provides sensitive, understated support for the characters’ emotional outpourings, with some beautiful playing from the horns. Laurent Naouri characterises Don Gaspar very well, despite not being in best voice…Junghoon Kim, accomplished throughout…El-Khoury is quite wonderful.

It’s surely the most remarkable feat of Donizettian endeavour yet…In a cast of five, without serious weakness, it’s indeed the Don Gaspar of the veteran French bass-baritone Naouri which draws most attention…his is a portrayal of complete conviction and certainty of theatrical ‘placing’. In purely vocal terms, though, it’s the leading baritone, Vito Priante, who reveals himself the most consistently polished, elegant Donizetti vocalist.

Lyric utterances in the grand style nestle alongside exuberant opera buffa writing, and some of the most impressive and innovative passages in the score are those where Donizetti combines the two genres simultaneously...This thoroughly committed performance is a wonderful opportunity to hear some familiar material in its original context and to discover some astonishingly innovative music which has never before seen the light of day.

The performance is collectible not only for its characteristic late French Donizetti, but for Elder’s advocacy and excellent work from the cast, led by Joyce El-Khoury’s gleaming Sylvia, David Junghoon Kim’s valiant Leone and Laurent Naouri’s comic Don Gaspar.