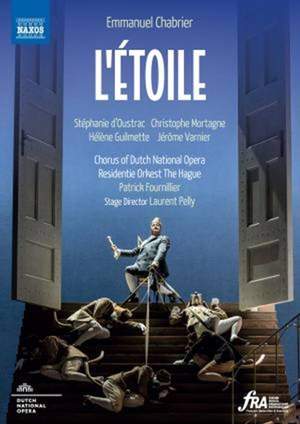 The music is marvellous in its deft wit, lightness of touch and refined yet exquisite sensuality…d’Oustrac makes a terrific Lazuli, impulsive and witty, wonderfully seductive throughout the role’s... — Gramophone Magazine, May 2019 More…

L’Étoile did much to establish Chabrier as a major force on the Parisian stage and his contemporary Henri Duparc praised him specifically for creating a French comic genre, both funny and musical – described as something of a French Die Meistersinger. The fanciful story is set in an imaginary kingdom and all, naturally, ends well. However,

despite the slight plot line L’Étoile is something of a pivotal work, a unique example of French 19th-century light opera, orchestrated with great sophistication and flooded with gossamer wit.

The music is marvellous in its deft wit, lightness of touch and refined yet exquisite sensuality…d’Oustrac makes a terrific Lazuli, impulsive and witty, wonderfully seductive throughout the role’s wide vocal range…Fournillier has all the grace and lightness of touch that the production sometimes lacks. It’s well worth hearing, whatever you think of Pelly’s staging.

It is the exposure this gem richly deserves.

There is much to like about Dutch National Opera’s 2014 production, which boasts Laurent Pelly’s impeccable stagecraft…L’Étoile may lack a big heart; but the trouser role of the common pedlar offers a small but perfectly-formed one, which in Stéphanie d’Oustrac’s performance beats loud and strong…This is a great artist in her prime.

As a visual representation of the opera, this performance is the best we’ll probably get for some time.