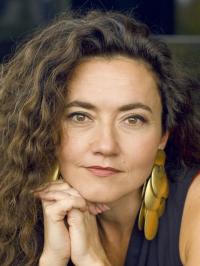 The French mezzo Stéphanie d’Oustrac was born in 1974 in Rennes, and is the great-niece of the composer Francis Poulenc. Initially intending to pursue a career as an actress, she studied in Lyon, where she came to the attention of William Christie, with whom she would go on to record the title-role in Lully’s Armide and Cybèle in his Atys, Irene in Theodora, and Argie in Rameau’s Les Paladins.

d’Oustrac is particularly associated with baroque and nineteenth-century French repertoire, including the title-roles in Carmen and Charpentier’s Médée, Charlotte in Massenet’s Werther and the Muse/Nicklausse in Offenbach’s Les contes d’Hoffmann, and is also acclaimed in Handel and Mozart; her discography includes Béatrice in Berlioz’s Béatrice et Bénédict from the 2016 Glyndebourne Festival (‘a perfect Béatrice, a comic actress with impeccable timing who relishes every word’ – BBC Music Magazine), the title-role in Destouches’s Callirhoé with Hervé Niquet and Le Concert Spirituel, and a solo album Médée furieuse, which prompted Gramophone to describe her as ‘a singers of great expressive power’.

Find out more at https://en.wikipedia.org/wiki/Stéphanie_d'Oustrac