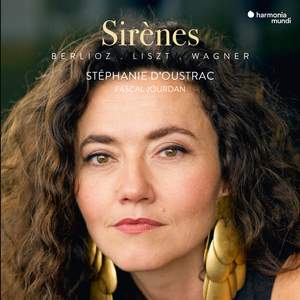 D’Oustrac’s artistry is compelling throughout but the Wagner owes something of its impact to the fact that her voice is at its freshest…[her] smoky tone, careful dynamic shading and wonderful... — Gramophone Magazine, May 2019 More…

In recording this first recital for harmonia mundi, Stéphanie d'Oustrac and Pascal Jourdan wished to measure themselves against three cornerstones of Romantic music, three composers who each in their own way made a decisive contribution to the evolution of the lied (Liszt), or even to the birth of the French mélodie, in the case of Berlioz’s Les Nuits d’été.

Much more widely known in their sumptuous orchestration, these songs take on a completely different dimension when accompanied by the sobriety of a piano.

This artistic approach found its ultimate resonance in the five Wesendonck-Lieder, which Wagner originally intended as a simple duo for voice and piano, though they were eventually to form one of the most famous cycles in the history of the lied.

D’Oustrac’s artistry is compelling throughout but the Wagner owes something of its impact to the fact that her voice is at its freshest…[her] smoky tone, careful dynamic shading and wonderful sense of line and phrase conspire with Pascal Jourdan’s marvellous playing to give us something special…The same combination of intelligence and immediacy is very much at work in Berlioz and Liszt.

The French singer’s gleaming bright mezzo brings soprano overtones to this music, and she is especially compelling in Berlioz’s anguished “Ah! Sans amour, s’en aller sur la mer” in Sur les lagunes, and skittish and playful in Villanelle. The piano reduction may lack the sensuality of Berlioz’s orchestral version, but both Jourdain and d’Oustrac compensate with their idiomatic phrasing and colouring.