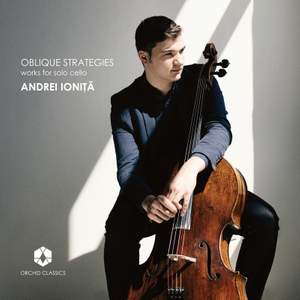 No. 1, Listen to the Quiet Voice

No. 3, Don't Stress One Thing More Than Any Other

No. 4, Look at a Small Object, Look at Its Centre

No. 5, What Are the Sections Sections Of?

No. 6, Don't Be Frightened to Show Your Talents

No. 10, Disconnect from Desire

The Romanian cellist talks to Katherine about his debut solo album Oblique Strategies, which includes the world premiere recording of Brett Dean's Brian Eno-inspired work of the same name as well as music by JS Bach, Kodály and Svante Henryson.

Described in The Times as “One of the most exciting cellists to have emerged for a decade”, former BBC New Generation Artist Andrei Ioniță draws together some of the greatest music ever written for solo cello. Ioniță gives the world-premiere recording of Australian composer Brett Dean’s 11 Oblique Strategies, from which the album takes its name. Dean’s work was inspired by the Oblique Strategy cards invented by Brian Eno and Peter Schmidt to spark creativity. In J.S. Bach’s exquisite Cello Suite No.1 a sense of harmony is created using a single melodic line, with mesmerising results. Kodály’s pioneering Sonata (1915) is another giant of the solo cello repertoire, and the album concludes with Black Run (2001) by contemporary Swedish polymath Svante Henryson.

Dean’s Eleven Oblique Strategies is a real find… The simple lessons of Dean’s work appear to feed into a remarkable account of Kodály’s physically and mentally challenging Sonata for Solo Cello in which Ioni≠a˘ is absolutely in the zone… Ioniță has a special way with the low-slung melodies of the Adagio and the distinctive sound of his open fifths, vibrating with such fizz, tells of his distinction and charisma as a player.

The recent BBC New Generation Artist’s debut makes for impressive listening. The Romanian delivers a rich-toned, intense reading of Bach — the Cello Suite No 1 — and a passionate performance of Kodaly’s enormous Sonata for Solo Cello.