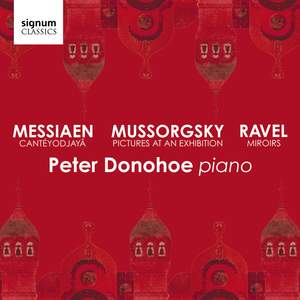 Donohoe earns plaudits with this magisterial account of Pictures at an Exhibition. Everything you could reasonably - or unreasonably – ask for is here…The French pieces are less well served. — BBC Music Magazine, May 2019, 3 out of 5 stars (Performance) / 4 out of 5 stars (Recording) More…

Ballet of the Unhatched Chicks

The Market Place at Limoges

The Hut on Hen’s Legs of the Baba-Yaga

One of the pinnacles of nineteenth-century pianism, Modest Mussorgsky’s Pictures at an Exhibition broke new frontiers in its writing for the piano through its use of ringing bell-like sonorities, dramatic juxtaposition of registers and dynamics, its approach to resonance, percussive octaves and rapid hand-alternations, and sheer grandeur of sound. Introducing new ideas about virtuosity that owe much to orchestral thinking in the ways the full range of the piano’s tone-colours are explored, this work requires immense stamina through combining great finger dexterity with unbridled power.

Mussorgsky’s masterpiece is coupled here with works by Ravel and Messiaen – composers who were indebted to the innovations of their Russian predecessor.

Miroirs comprises a set of five pieces evoking contrasting moods and pianistic characters. Far from being Impressionist – a movement with which Ravel had little real affiliation –the ‘Mirrors’ of the title suggests more Symbolist associations in that the individual pieces explore ambiguities between supposed reality and ‘reflected’ simulation. Ravel was particularly fascinated by a line from Shakespeare’s Julius Caesar: ‘the eye sees not itself, but by reflection, by some other things.’

An unusually non-descriptive work for Messiaen, without religious references or bird- song, Cantéyodjayâ is about musical process and is constructed as a mosaic-like collage in which a jaunty rhythmic refrain is contrasted with a multiplicity of contrasting ideas, many of which are re-workings from his gargantuan Turangalîla-Symphonie.

Donohoe earns plaudits with this magisterial account of Pictures at an Exhibition. Everything you could reasonably - or unreasonably – ask for is here…The French pieces are less well served.

His promenader marches purposefully forward, while the pictures themselves are firmly delineated, neither adding to nor subtracting from the score…Colours are suitably more vivid in Donohoe’s Ravel…Messiaen’s exotic-experimental Cantéyodjayâ is a perfect musical realisation of an abstract mosaic, not least in Donohoe’s brightly faceted interpretation, whose chiselled textures and sharply defined lines make this, for me, by some distance the highlight of the disc.