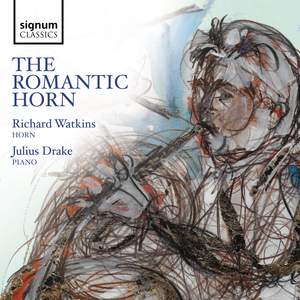 The British horn-player talks to David about his new album of music by Beethoven, Strauss, Schumann, Scriabin and more with the pianist Julius Drake, out now on Signum Classics.

This recording presents a selection of some of the most well-loved works for the horn. Titled The Romantic Horn, the works highlight the lyrical gems of the European repertoire for the instrument, with works by Beethoven, Schumann and Scriabin.

Richard Watkins is one of the most sought-after horn players of his generation. He was Principal Horn of the Philharmonia Orchestra for twelve years, is currently a member of The Nash Ensemble, and is a founding member of London Winds. His extensive discography includes recordings of concertos by Mozart, Malcolm Arnold, Reinhold Glière, Ethel Smyth and Colin Matthews, as well as Mozart’s Sinfonia concertante and chamber music for horn by Schumann, Schubert and Poulenc.

Pianist Julius Drake lives in London and specialises in chamber music, working with many of the world’s leading artists, both in recital and in the recording studio. He performs regularly across the globe, in venues that include include Amsterdam’s Concertgebouw, Berlin’s Philharmonie, and New York’s Carnegie Hall; and festivals such as the BBC Proms and Salzburg Music Festival.

This is grand, swaggering playing: two virtuosos out to bring the house down…It’s not what you would call a historically informed reading [of the Beethoven], exactly, but it’s undeniably impressive…A bravura account of Gilbert Vintner’s Hunter’s Moon ends the disc with a flourish and leaves an unmistakeable impression that these two distinguished players are certainly having a lot of fun.

Watkins’s rich, singing tone is complemented by Drake’s lively pianism and they luxuriate especially in the two most substantial “encores”: Schumann’s superb Adagio and Allegro, and Poulenc’s dark, soulful Elégie.

The father and son Strausses here offer a fascinating comparison, although it is possibly a step too far for Watkins’ booklet claim that Franz, with regards to Richard, is an ‘equally capable composer’. Franz Strauss’ Notturno, Op 7 rises to an impassioned climax; if it has enigmas, they are multiplied exponentially in Richard Strauss’ Andante. Schumann’s famous Adagio and Allegro is the finest performance here, the top C shining, the dynamism undeniable. If Drake is a touch underpowered in Dukas’ Villanelle, the Poulenc Elégie is a fine account. An enjoyable recital, well recorded.