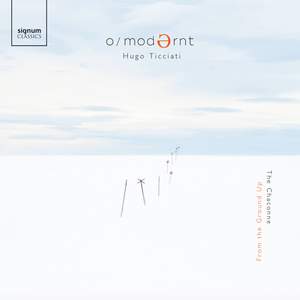 Offer, From the Ground Up: Chaconnes

This beautifully-performed and produced recording is one of a kind…a mesmerising voyage through the history and possibilities of the chaconne…The O/Modernt Chamber Orchestra traverses these diverse... — BBC Music Magazine, September 2019, 4 out of 5 stars More…

Originating as a sexy dance in South America, the ‘chacona’ crossed the Atlantic and established itself in Spain as an irresistible temptation. In 1615, it was banned from Spanish theatres for being ‘lascivious, dishonest, offensive to pious ears’, but the attractions of the chaconne held sway.

From the Ground Up traces its allure from early Spanish chaconnes, through the worlds of Purcell and Piccinini, to Bach’s magisterial example for solo violin. Reanimating the ‘lascivious’, Purcell’s ground basses furnish a harmonic groove for readings from Shakespeare by British actor Samuel West, accompanied by New York rapper Baba Israel.

This beautifully-performed and produced recording is one of a kind…a mesmerising voyage through the history and possibilities of the chaconne…The O/Modernt Chamber Orchestra traverses these diverse styles with admirable skill and flexibility. The ensemble’s delightful performance of 17th-century works are a particular highlight.

Bach’s Chaconne in D Minor is beautifully played by violinist Ticciati. At the end of the disc it is then “remixed” for piano and percussion as a background to a reading of Shakespeare’s Sonnet 130 and other readings. Shakespeare bumps up against “beat” poetry. This is a unique presentation, and uniquely appealing in many ways.

Ticciati surrounds himself with instrumentalists so at one with the chaconne repertoire, musicians who bring the genre’s inherent sexiness and sway to every note…Ticciati’s own performance of Bach’s Chaconne, which forms the heart of the album, is something that warms into gloriousness…O/Modernt improvise music that flows between the performers’ bodies as if it were the oxygen that they share.