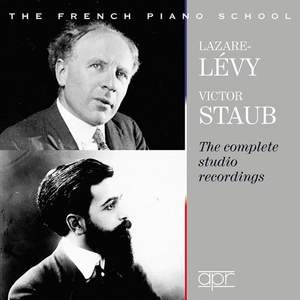 For me, Victor Staub’s recordings, all from the late 1920s, are the most revelatory of the lot... His exquisitely pellucid touch, as consistent in fleet passagework as in sustained cantabile... — Gramophone Magazine, April 2019 More…

Chabrier: Sous-bois (No. 4 from Pièces pittoresques)

Chabrier: Idylle (No. 6 from Pièces pittoresques)

This is the second release in an important new APR series devoted to the French Piano School. For around 150 years France has nurtured a distinctive style of pianism centred on the teaching of the Paris Conservatoire. This series of recordings aims to explore in depth the often-forgotten recordings made during the first fifty years of the 20th century. Victor Staub (1872-1953) and Lazare-Lévy (1882-1964) were both students of Louis Diémer at the Paris Conservatoire in the latter part of the 19th century. The Staub titles are almost forgotten and none have ever been reissued before. Also all but unknown is the 7” Crown LP Lazare-Lévy recorded on the ‘Siena pianoforte’ in Israel in 1951. As one would expect, clarity, brilliance and re?nement are much to the fore in these exemplars of the French School.

For me, Victor Staub’s recordings, all from the late 1920s, are the most revelatory of the lot... His exquisitely pellucid touch, as consistent in fleet passagework as in sustained cantabile playing, is a joy to the ear. Staub’s ample rubato always seems integral to the music’s expressive demands without exceeding the boundaries of good taste, even by today’s more strait-laced standards…Intelligence is the watchword for Lazare-Lévy’s probing interpretations of a wide repertory.

A further release in what is developing into a valuable series.