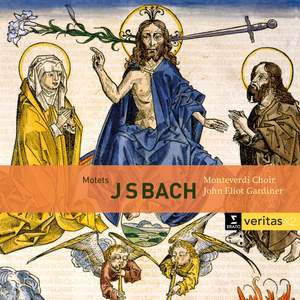 Taken together these motets and quasi-motets form one of the peaks of Bach's art as a composer of choral music. Compressed and complex, they make enormous demands on performers, requiring exceptional virtuosity, stamina and sensitivity to abrupt changes of mood and texture. Bach’s characteristically skilful use of fugue, canon and counterpoint makes this music endlessly fascinating, but most of all these are works of emotional power, revealing Bach's compassionate nature, the dancing joy he takes in praising God, and his total certainty as he contemplates death. John Eliot Gardiner’s extraordinary technical and interpretative skills ensure recognition of the motets and cantatas as some of the best of Bach.

A key figure in today’s musical landscape, John Eliot Gardiner has established a number of ensembles – both instrumental and vocal – that he directs in a wide-ranging repertoire. Baroque music, with which he first made his name, remains very important to him, particularly the works of Johann Sebastian Bach; he has even published a major biographical study of the composer, Music in the Castle of Heaven.