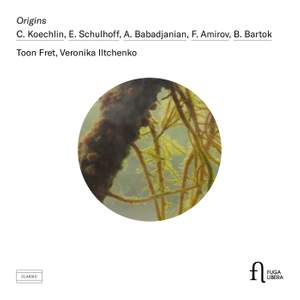 I. Song of the Ashugi

IV. In the Azerbaijan Mountains

V. At the Spring

Under the title ‘Origins’, this disc brings together works by composers of the first half of the twentieth century who frequently found inspiration in the musical traditions of their country. This musical journey travels across Europe from France to the borders of Asia. If Béla Bartók’s role in this field of the integration of popular traditions into classical language is indisputable, the personalities of the other composers assembled here deserve to be discovered. The Jewish composer Erwin Schulhoff was one of those whose works were relegated by the Nazi regime to this category of ‘degenerate music’. The Azerbaijani Fikret Amirov and the Armenian Arno Babajanian were victims of the constraints of the Soviet regime. And although Charles Koechlin produced an imposing catalogue of works, he suffered throughout his life from the fact that his career as a composer was eclipsed by his reputation as a theorist. All these works inspired by national music are contemporary with the political turbulence that agitated Europe between the two world wars, but also with the numerous movements that caused major upheavals in every artistic field during the same period.