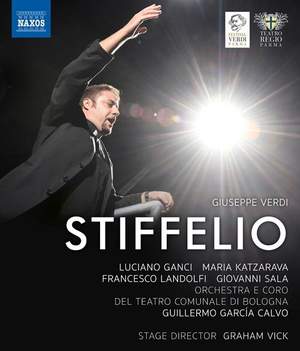 Graham Vick’s production of Stiffelio is a triumph. The lines between the viewer and the viewed are blurred, challenging the comfortable assumption that music drama is something that happens... — BBC Music Magazine, April 2019 More…

Verdi’s Stiffelio is a tense moral drama in which a Protestant minister learns of his wife’s betrayal and is torn between a thirst for revenge and his religious duty of forgiveness. These themes of adultery and divorce were social taboos in 1850, and Stiffelio was met with such censorship and disapproval that it was soon withdrawn. Today we can appreciate both the title character’s significance as the first true Verdi tenor, and the many wonderful moments in this ‘most unjustly neglected of Verdi’s operas’. This unique and dynamic production from Parma was acclaimed for taking us to ‘a whole new theatrical world’ (Huffington Post), and as ‘nothing short of a coup’ (bachtrack.com).

Graham Vick’s production of Stiffelio is a triumph. The lines between the viewer and the viewed are blurred, challenging the comfortable assumption that music drama is something that happens to other people across the footlights. This is music-drama with an equal stress on both words.

In seeking contemporary relevance, Vick turns Stiffelio into a divisive figure in society which goes against the grain of his character as revered shepherd of his flock…Vick’s cast enter the spirit admirably, even if there aren’t any outstanding voices to savour. Luciano Ganci has a fine, open tenor and conveys the angst of Stiffelio effectively.

The standard of singing is high and Vick draws creditable acting performances from all his principals. Stiffelio is presented as a passionate, potentially violent man…Ganci’s strong, tensile tenor [is] used with consistent dramatic punch.

Luciano Ganci is Stiffelio, his tenor having a good Italianate thrust, his demeanour intense.