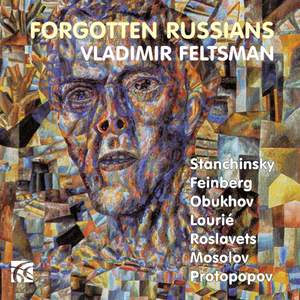 Stanchinsky: Prelude in the Lydian Mode

This recording brings together the works of seven composers who were born in Russia between 1882 and 1900. Five of them – Roslavets, Feinberg, Stanchinsky, Protopopov and Mosolov remained in Russia. Two – Obukhov and Lourié – emigrated to France after the Revolution of 1917. Nowadays, these composers are often called “Forgotten Russians” because their works are rarely performed and their names unknown outside a narrow circle of specialists and people interested in Russian art of the first quarter of the twentieth century.

Pianist and conductor Vladimir Feltsman is one of the most versatile and constantly interesting musicians of our time. His vast repertoire encompasses music from the Baroque to 20th-century composers. A regular guest soloist with leading symphony orchestras in the United States and abroad, he appears in the most prestigious concert series and music festivals all over the world.

Feltsman plays these endlessly fascinating and hauntingly memorable scores with astonishing virtuosity and tonal sensitivity…It is impossible to imagine a more profoundly sympathetic advocate of this inexplicably neglected repertoire, complemented throughout by beguilingly natural engineering from Adrian Farmer.

His involvement is shown by the fact that the recording sometimes catches him breathing hard in his concentration, but more importantly by the finesse and sensitivity he brings to a demanding programme.