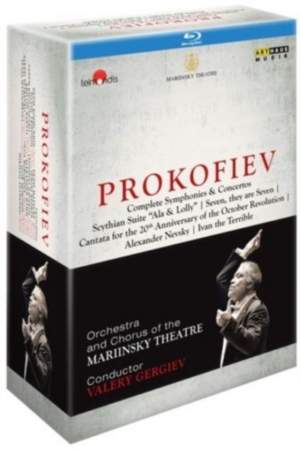 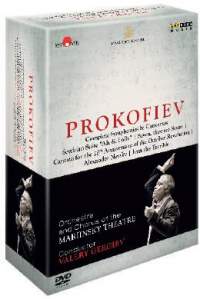 On the occasion of the 125th anniversary of Sergei Prokofiev in April 2016 the worldwide acknowledged Russian conductor Valery Gergiev featuring the Orchestra of the Mariinsky Theatre and world’s leading singers and instrumentalists like Leonidas Kavakos, Denis Matsuev, Sergei Redkin, Daniil Trifonov, Olga Borodina and Mikhail Petrenko performed all masterworks of the composer.

A veritable Prokofiev marathon – the public had the chance to enjoy all the symphonies, instrumental concertos, major cantatas and oratorios like the expressionistic Seven, they are Seven, the provocative Cantata for the 20th Anniversary of the October Revolution as well as his later masterpieces Alexander Nevsky and Ivan the Terrible in Moscow and St Petersburg on two days. A great project that could not have been possible without the insatiable energy of Valery Gergiev. As a special feature of this extensive edition a 90-minute documentary about the life and work of the Russian composer Sergei Prokofiev has been added. The film – Prokofiev: On the Way – is mainly based on a true story and shows the similarities between him and Russia’s famous conductor Valery Gergiev.