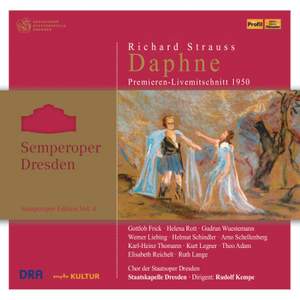 Kempe conducts the score without cuts, and he brings to it a wonderful sense of pacing, striking an effective balance between drama and Apollonian serenity…The sound captured by the radio engineers... — Gramophone Magazine, March 2019 More…

A unique document of contemporary Dresden history lies safely preserved in the Deutsches Rundfunkarchiv: the recording of the Daphne premiere of 1950, also planned as a tribute 'In Memoriam Richard Strauss' for that friend and champion of the Dresden Staatskapelle and Staatsoper, who had died the previous year. The presence of this buried treasure was ample cause for celebration - until we listened to the recording. We originally considered the surviving Daphne tapes as unfit for release on account of its recording quality and acoustics, far removed from the sound ideal to which we had hitherto aspired.

Kempe conducts the score without cuts, and he brings to it a wonderful sense of pacing, striking an effective balance between drama and Apollonian serenity…The sound captured by the radio engineers is rough in the extreme…The ear adjusts, though, and the sound seems to me to improve as we get closer to Daphne’s final scene, performed beautifully…This is undoubtedly an important document.

It needs to be said at the outset that the sound quality is variable, to put it mildly…The performance itself, however, is for the most part extremely beautiful…Kempe conducts with restrained passion and considerable intensity…Vocally, this is very much an ensemble performance, cast without star singers…but it’s both a superb achievement and a historical document of tremendous importance.